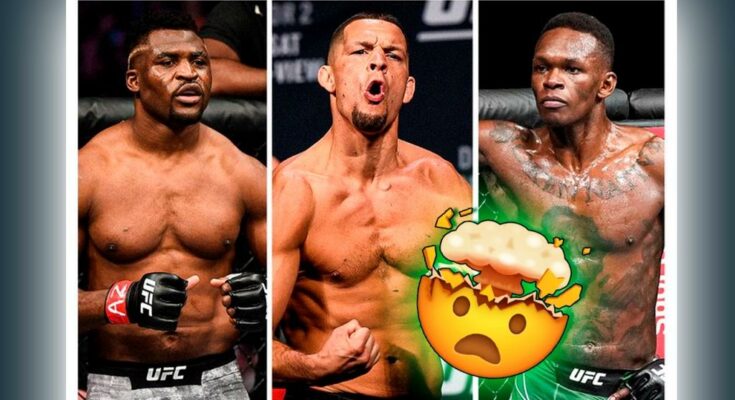 Nate Diaz claims Francis Ngannou and Israel Adesanya as the only two worthy opponents that the promotion could match him up against. Ngannou is the reigning heavyweight champion whereas Adesanya is the king of the middleweight division.

During an appearance on Ariel Helwani’s The MMA Hour podcast, the Stockton native said:

“The only worthy opponents they have for me are Francis Ngannou or Adesanya.”

Diaz, who is currently 1-3 in his last four fights inside the octagon, believes Adesanya and Ngannou are the only two fighters worthy of facing him and that has left fans shocked. One of them responded by claiming that the 37-year-old should be immediately tested for either “CTE” or “a new strain of weed.”

The UFC veteran said he wouldn’t mind exchanging leather with ‘The Problem Child’ down the line. Diaz plans on taking on some of the best boxers in the world and putting on a show for combat sports fans across the globe:

“I want to fight some of the best boxers and some s*** like that, yeah I’ll fight everybody and anybody that you can think of. Anyone who wants to fight I am going to fight, anyone who is talking some s*** like Jake Paul. For some reason people put him with my a** and it isn’t for no reason because he is f****** doing his thing. He’s saying he will whip everybody’s a** but that’s what I have had in the past and I’m here like ‘You are not whipping my a**.'”

However, Diaz must first finish out his contract with the UFC before crossing over to boxing. He has made it clear that he doesn’t want to continue fighting in the UFC going forward and has urged the promotion to book the last fight on his contract so that he can move on.

The Stockton native has claimed that the promotion has been intentionally refraining from booking his next fight because they want him to extend the contract. However, he has made it clear that no matter what, his next fight will be his last in the octagon, at least for the foreseeable future.