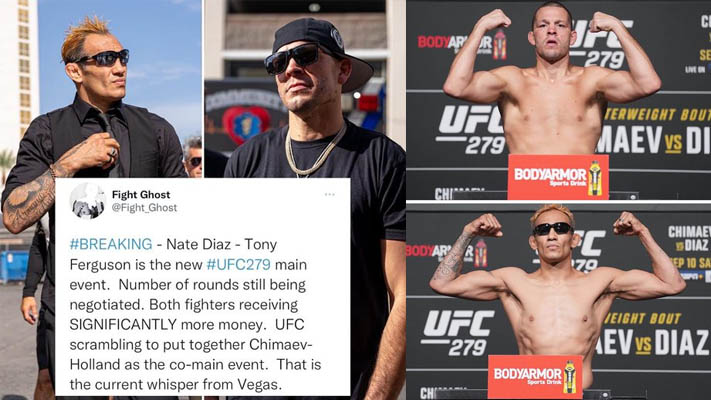 After making weight, Nate Diaz was informed that Khamzat Chimaev weighed 7.5 pounds over the 170lb limit. Fans are now reacting to rumors that the main event is canceled, with Tony Ferguson now likely to face his fellow veteran.

‘Borz’ approached the scale and shocked the entire MMA world when he weighed in at 178.5lbs, which is closer to making weight at middleweight, a division above his current one.

It looks like the UFC will punish the Swede by either pulling him from the card or matching him up with a different opponent for tomorrow’s event.

According to MMA journalist Cole Shelton, a source inside Diaz’s camp announced that his proposed fight with Khamzat Chimaev is “officially off.” If he does compete at UFC 279, Tony Ferguson is ahead of the pack to face the 37-year-old.

Fans are clammering to come up with possible solutions for UFC 279, with the majority of supporters attempting to resolve the issue and keep Nate Diaz on the card by any means necessary.

Other fans shared their views on the situation, firing shots at the UFC for their attempt at making Diaz walk through the fire against Khamzat Chimaev before bowing out of the company.

While he is prepared to step into the octagon and lock horns with the dangerous Khamzat Chimaev, Nate Diaz now finds himself in a powerful position with the UFC.

The BJJ Black Belt has already publicly confirmed that he was interested in facing Tony Ferguson in his final fight with the company, but was instead matched up against the young star.

Diaz now has the opportunity to compete in the final fight on his UFC contract and face someone closer to his age, meaning fans may get one last legendary fight before he leaves the promotion.