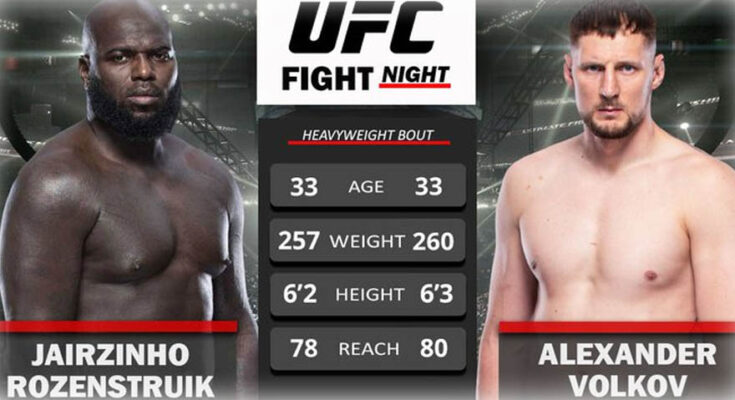 Less than 2½ years ago, Jairzinho Rozenstruik was an undefeated UFC heavyweight on the rise. At that same time, Alexander Volkov was on a hot run during which he won seven of eight fights.

Since then, both have lost several bouts against the division’s top contenders. They each are coming off a defeat.

But Volkov and Rozenstruik are still in the top-10, and they meet on Saturday in the main event of a matinee UFC Fight Night 207 in Las Vegas, with the winner solidifying his spot in the heavyweight hierarchy.

Rozenstruik (12-3 MMA, 6-3 UFC), who meets Volkov (34-10 MMA, 8-4 UFC) in a heavyweight headliner at the UFC Apex, is quite confident he’s going to need sharp defensive grappling when he steps in the octagon for the ESPN+-streamed main event.

Volkov (34-10) has dropped two of his last three fights, most recently a submission at the hands of Tom Aspinall in March. The Russian is No. 8 in the ESPN heavyweight rankings.

The 10th-ranked Rozenstruik (12-3), who also has lost two of his last three, last fought in September, when he lost a unanimous decision to Curtis Blaydes.

Saturday’s fights at the UFC Apex are on ESPN+, with the main card at 4 p.m. ET and prelims at 1.

The preliminary card can either be watched on ESPN+. When it comes to the main card, that can be seen on ESPN+ as well.

Stream the fights on ESPN+: Download the ESPN App

After a 14-2 start to his MMA career, Ige has gone 1-3 in his last four outings ahead of this fight. His three losses over that stretch have all come by unanimous decision, giving him an overall 6-5 record whenever his fights go the distance.

On the other hand, nobody has been able to stop Evloev’s undefeated dominance. He’s won all five of his UFC fights by decision, which shouldn’t provide his opponent with much optimism given Ige’s recent history.

Things haven’t been going well for Trizano since returning to the featherweight division in May 2019. He’s lost two of his last three bouts since the return, which includes going the distance in his last fight and losing unanimously to Hakeem Dawodu.

On the other hand, this fight is Almeida’s UFC Fight Night debut. After losing to Daniel Zellhuber on Dana White’s Contender Series in September, the 31-year-old rebounded by defeating Italo Trindade at Jungle Fight 103 just a month later. Only time will tell if he can keep that momentum going.

Botelho started her MMA career with a 7-1 record but has since lost three of her last four fights. She’s now lost by decision in back-to-back outings, which hasn’t done her momentum any favours ahead of Saturday.

Meanwhile, Silva is starving after winning five straight fights. Her lost outing involved a submission victory over Qihui Yan on Dana White’s Contender Series, so we’ll be able to find out if she can use that momentum to begin a successful UFC career.

The lone light heavyweight matchup of the night will see Alonzo Menifield (11-3-0) take on Askar Mozharov (21-8-0).

Menifield is looking to get his head back in the game after losing three of his last five fights. William Knight managed to defeat him by unanimous decision back in December, making a win here necessary if Menifield hopes to be treated like a threat.

It’s going to be tough, though, because Mozharov is riding a three-fight winning streak ahead of his UFC debut. He defeated each of those opponents by KO/TKO and only time will tell if he can keep that trend going against Menifield.

Herrig could use the victory after losing each of her last three fights. She now hasn’t won since December 2017, making it necessary for her to win to continue her UFC career.

At the same time, Kowalkiewicz is on a five-fight losing streak and hasn’t tasted victory in over four years. She’s challenged for the strawweight championship before, but it may not happen again if she loses on Saturday.

da Silva Coelho’s UFC tenure hasn’t gotten off to a hot start, going 1-2 in his first three fights after a 20-1 start to his career. He must deal with Solecki, who’s out for revenge after Jared Gordon beat him at UFC Vegas 38, snapping a six-fight winning streak in the process.

Jackson, who’s won his last two fights, was supposed to face Darrick Minner, but the latter withdrew due to a concussion. Now, Argueta will be taking Minner’s place and making his UFC debut in Las Vegas. He’s undefeated, so it’ll be interesting to see if he can handle the uptick in talent.

Adashev lost back-to-back fights after joining UFC before defeating Ryan Benoit, so it isn’t a shock to see him as the betting underdog. Besides, Osbourne has won six of his last eight fights and also has momentum from a unanimous decision victory over CJ Vergara at UFC 268.

Stolze began his UFC career on a solid note but has now lost two straight fights — including his last by knockout. While Saint-Denis also lost his last fight, he won four in a row before that, which includes three by submission.

Tony Gravely (22-7-0) will also step into the octagon against Johnny Munoz Jr. (11-1-0) in a bantamweight fight on Saturday.

Gravely has gone a solid 3-1 in his last four fights, winning two by decision and another by TKO. Munoz should give him issues, though, considering how he just submitted his last opponent, whereas Gravely is 3-5 when his fights are decided by submission.

Zhumagulov has been struggling to win lately, going 1-3 in his last four fights and was just TKO’d by Manel Kape in his last outing in December. On the other hand, is a perfect 3-0 since joining UFC and has won nine straight bouts overall.

Andreas Michailidis (13-5-0) and Rinat Fakhretdinov (18-1-0) will meet in a preliminary welterweight bout this Saturday.

Michailidis could certainly use the win after Alex Pereira TKO’d him with a flying knee in his last fight back in December. He’ll definitely have his hands full with Fakhretdinov, who makes his highly-anticipated UFC debut after winning 17 consecutive fights.

Blanchfield is the heavy favorite after winning five straight fights, which includes a 2-0 record since joining UFC. Even with that being said, Aldrich should still be somewhat of a challenge considering how she’s won each of her last three fights.