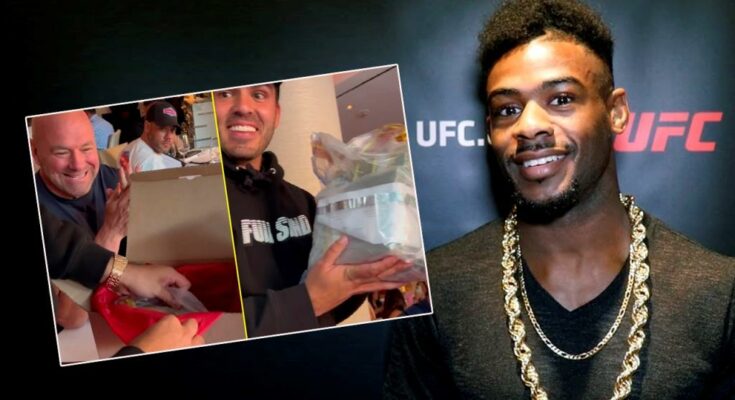 UFC president Dana White has surprised Kyle Forgeard from The Nelk Boys with $250,000 for his birthday.

It’s no secret that The Nelk Boys are pretty close to members of the UFC family, whether it be fighters or the bosses themselves. Dana White, meanwhile, has never been shy about expanding his reach beyond mixed martial arts in the name of drawing in more fans – or just making some new pals.

The Nelk Boys seem to have made a pretty good impression on the UFC president and as such, he’s been more than happy to hang out with them.

Now, as per the following footage, he’s shown Kyle how highly he thinks of him by giving the YouTuber a very nice birthday present.

“Dope! My birthday is July 31st! Can’t wait to see what Dana gets me! @danawhite”

“Retweet if you think Uncle Dana should give all the UFC’s top 15 ranked fighters $250,000 for their next birthday.”

“I think everyone involved with the UFC would love a surprise $250K! But what Dana does with his personal money is up to him!”

“When we starting the union bois”

“Well I’m not in the ufc anymore but same energy, place is losing all integrity it once had.”

“He’s giving away the money he stole from fighters.”

Dana White has come under scrutiny several times regarding fighter pay and benefits in the UFC.

White has often said if fighters have an issue with pay and benefits, they should go and start their own MMA promotion.