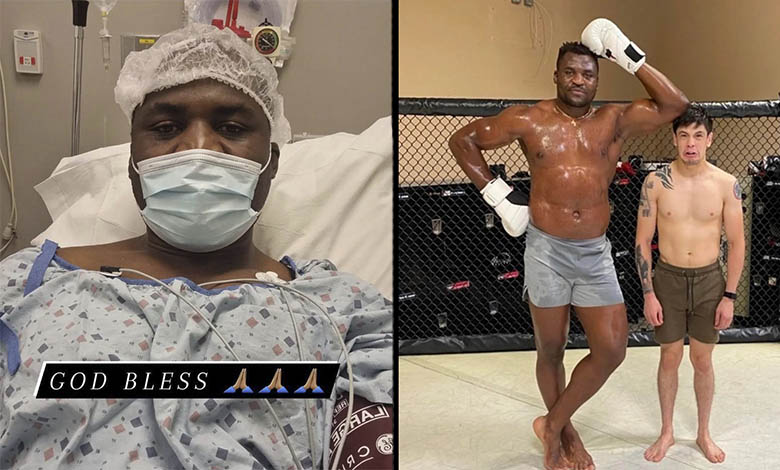 UFC heavyweight champion Francis Ngannou is out of surgery and in good spirits.

Following his title defense at UFC 270 over Ciryl Gane, Ngannou was evaluated for a knee injury, and it was determined that surgery would be required to repair a torn MCL and damaged ACL. Not only did Ngannou enter the fight against Gane on the last fight of his UFC contract, he also competed knowing his knee was injured.

Francis Ngannou told reporters that he suffered a Grade 3 MCL tear and ACL damage four weeks head of the fight. He wore two knee braces during the fight against Gane and was able to utilize a solid wrestling approach to retain his title.

Despite the damage to his limb, Ngannou emerged victoriously via unanimous decision, and after taking a trip home to Cameroon, underwent surgery on Friday. According to Ngannou and his team, the surgery to repair his ACL and MCL went well with no complications.

“Knee surgery went very well today ( ACL reconstruction and MCL repare). PS: no meniscus damage 🙏🏽Thank you to Dr Alattrache and staff for taking great care of me. Rehab time to get everything back to normal and get back on track. Sincerely, THE KING 🤴” – Francis Ngannou wrote on Instagram.

Francis Ngannou, 35, could face a nine-month recovery period before preparing to return to action. Due to the length of time away, UFC president Dana White has entertained the idea of a potential interim title fight while Ngannou is on the mend. Furthermore, White said that former light heavyweight champion Jon Jones could be a participant in the vacant interim title bout.

In addition to healing up, Ngannou also has a contract situation to settle with the UFC, as he is currently only tied to the promotion for a year from his last bout due to a champion’s clause.