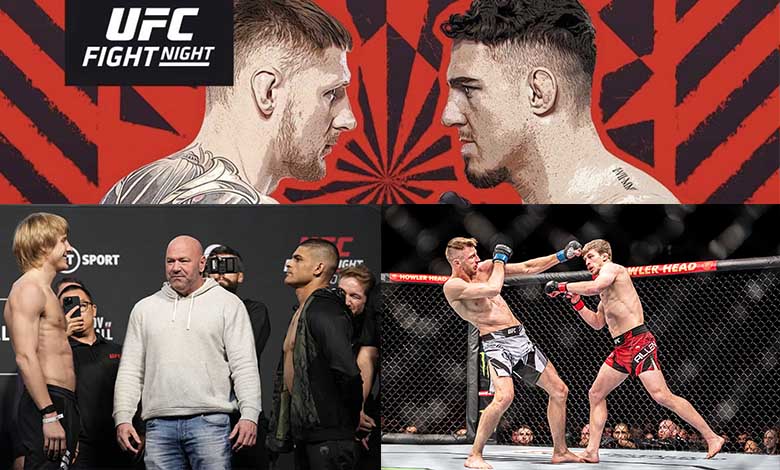 Alexander Volkov (34-9 MMA), a former Bellator heavyweight champion, was last seen in action at UFC 267 where he scored a unanimous decision victory over Marcin Tybura. That win was preceded by decision loss to Ciryl Gane.

Meanwhile, Tom Aspinall (11-2 MMA) will enter Saturday’s main event sporting a seven-fight win streak, his latest being a TKO victory over Sergey Spivak. All seven of the Brits recent wins have come by stoppage, six of which occurred in the very first round.

Hooker (21-11 MMA) returns to the featherweight division after dropping three of his last four fights at lightweight. In his most recent effort at UFC 267, ‘The Hangman’ was submitted by Islam Makhachev in less than three minutes.

UFC London also features the return of fan favorite Paddy Pimblett who takes on Kazula Vargas in a lightweight affair.

Pimblett (17-3 MMA) made his Octagon debut in September of 2021, where he scored a first round TKO victory over Luigi Vendramini. The Liverpool native is one of the promotions hottest prospects and is looking to cement that status this evening.

Meanwhile, Kazula Vargas (12-4 MMA) has gone 1-2 since joining the UFC ranks in the summer of 2019. The Mexican standout earned a win over Rong Zhu in his most recent effort at UFC 261.

Get all of today’s live results and highlights below (refresh for updates):

Arnold Allen vs. Dan Hooker – Allen def. Hooker via TKO (punches) in Round 1

Paddy Pimblett vs. Kazula Vargas – Pimblett def. Vargas via submission (RNC) at 3:57 of Round 1

Mike Grundy vs. Makwan Amirkhani – Amirkhani def. Grandy via technical submission (anaconda choke) at 0:57 of Round 1

Nikita Krylov vs. Paul Craig – Craig def. Krylov via submission (triangle choke) at 3:57 of Round 1

Muhammad Mokaev vs. Cody Durden – Mokaev def. Durden via submission (guillotine) at 0:58 of Round 1

Who are you picking to win today’s UFC London main event?