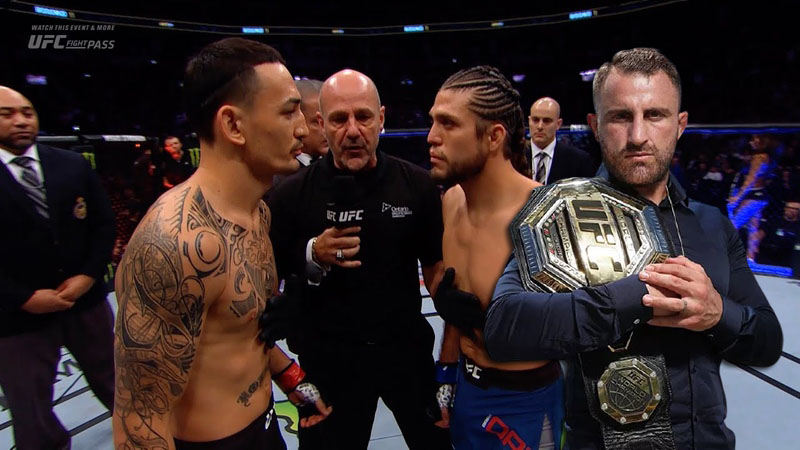 The first time they were supposed to fight, there was no real enmity between Brian Ortega and Alexander Volkanovski. However, on the eve of their UFC 266 throw, the champion does not hold back his thoughts about the challenger.

Before the COVID-19 bout forced Volkanovski to withdraw from the competition, it was expected that he and Ortega would fight a few months ago. Instead, they were coaches in the second season of TUF, which increased the tension between them, causing dislike for each other.

Heading into his highly anticipated championship fight at UFC 266 this weekend, the featherweight champion is excited to finally shake hands with T-City. Speaking at the MMA Hour, he says that fans can expect a spectacular fight because he knows that Ortega will weaken under pressure when they meet face to face.

“I’m going to be very calculated in my approach, but there’s holes that I see. Obviously you’ve got the guys like Max (Holloway), who’s a durable guy, who’s got a great chin, and he’s obviously fit and got a gas tank. So a guy like that is going to be more difficult,” Volkanovski explained.

“With Ortega, even being with him through The Ultimate Fighter and things like that, I can just see through his mentality and the things that he said, that he’s not good under pressure. He looked great in his last fight, but that’s just because he was able to do whatever he wanted.”

If Alexander Volkanovski gets past Brian Ortega on Saturday night, there is a solid chance that he will be having a third fight with former champ Max Holloway. The two had a pair of close fights, and while Alex won both of them, many thought that the second one in particular should have gone to Max, after he dropped the champ.

One might expect this to frustrate Alexander, but this is not the case at all. He says that he actually does not mind fighting Max a third time, since the Hawaiian has fought other people since their rematch, instead of just trying to wait for a third fight.

“At the end of the day, he did what he had to do anyway. So we’ve got Ortega, Ortega’s the number one contender, I’m going to go out, take him out, and then whoever’s next. Who’s the next in line?” Volkanovski said.

“Max, he’s had his fights. I think he’s fight Yair (Rodriguez)… he wasn’t sitting back waiting, just to get another shot. So good on him, I’m going to give credit where credit’s due. He’s doing what a number one contender should do, what I did before I was the champ.”

Alexander Volkanovski will face Brian Ortega this weekend at UFC 266. It will be interesting to see what will happen to him next, if he overcomes this difficult opponent.

What do you think about this?