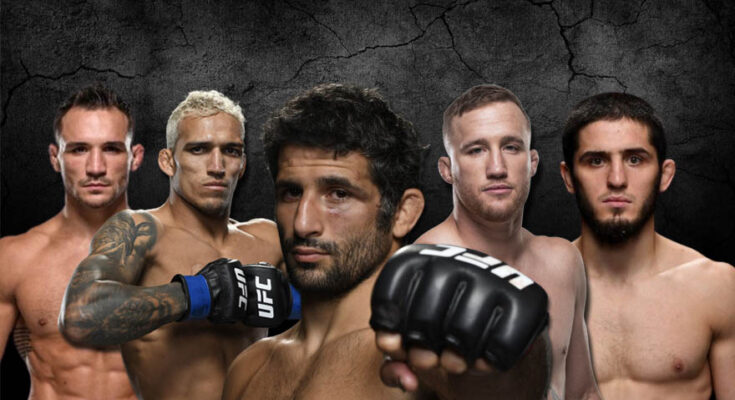 Lightweight contender Beneil Dariush is confident enough in his ability to look at the rest of the division as ‘food’. There are multiple impressive winstreaks currently in the lightweight division.

Former champion Charles Oliveira (11) and Islam Makhachev (10) lead the pack. Close behind is ‘Benny’ who is on a seven-fight streak. The Iranian-born fighter believes he is deserving of the next title shot but admitted he doesn’t want to wait.

Speaking to Brett Okamoto for ESPN MMA, Beneil Dariush was asked where he sees himself in the division and whether he’ll fight Oliveira before Makhachev. ‘Benny’ is currently the No.6 ranked lightweight:

“In my mind, If I’m as good as I think I am, If I’m the best in the world, then everybody’s food. All these guys are just food. The only difference is the rotation and who’s going to be the first to eat. That’s basically how I look at it. That’s one of the reasons I’m not jumping on it like, ‘Charles has to give me this fight!.’ I could clearly say ‘Hey buddy, you always say the top five never give you a fight.”

“We were scheduled to fight. We were meant to fight in october 2020. You bailed on me and said family issues but in December fought Tony Ferguson. You’re being a hyprocrite.’ If I really cared that’s how I’d come at this, I’d say he’s being a hypocrite and owes me the fight… I’m annoyed. That’s how I feel right now.”

Okamoto then pressed Beneil Dariush and asked him whether he’s open to waiting for his title shot if the UFC gives it to Islam Makhachev first. Dariush, who hasn’t fought since May 2021, admitted that he didn’t want to wait and wanted to be back in the octagon as soon as possible:

“Nah man I don’t want to wait. I want to fight. If Islam gets this fight, cool. If I get this fight cool. You can make a case for both of us. Islam is on a ten fight streak, I’m on a seven… You can make a case for both. Honestly I don’t care, let me know who’s next. Am I fighting [Michael] Chandler? Am I fighting Dustin Poirier or will I fight Islam?”

Islam Makhachev and Beneil Dariush were due to face each other in February 2022. It was dubbed as an unofficial No.1 contender fight. ‘Benny’ however was forced to withdraw from the fight due to a leg injury.

Beneil Dariush has named Charles Oliveira as the fighter he believes has the best offense in the lightweight division. Dariush admitted that while sometimes it is reckless, Oliveira’s arsenal of tools and his UFC finishing record speak for themselves.

Neither Beneil Dariush nor Charles Oliveira have lost a fight since 2018. Oliveira’s 11-fight winning streak took him to the lightweight title. Dariush will be hoping his impressive seven-fight streak is enough to face the Brazilian for the vacant lightweight championship.