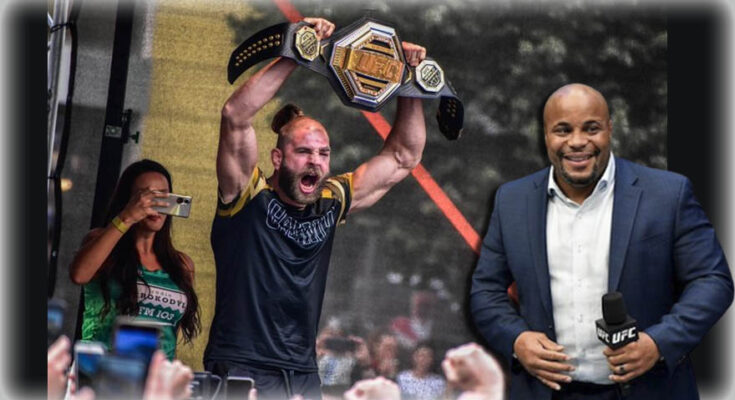 Daniel Cormier can see UFC light heavyweight champion Jiri Prochazka ruling the division for a while.

Since Jon Jones relinquished the title, the belt has changed hands three times, most recently this past Saturday when Jiri Prochazka (29-3-1 MMA, 3-0 UFC) submitted Glover Teixeira in the UFC 275 headliner in Singapore.

Projected to be next in line is former champ Jan Blachowicz (29-9 MMA, 12-6 UFC) and after watching Prochazka show his championship mettle, Cormier is picking him to retain his belt.

“I think he’s the type of guy that could bring some stability to this weight class,” Cormier said on his ESPN show “DC & RC.” “And even looking at that celebration, it was tremendous to watch him receive that type of adulation going home, but it’s almost odd for him because he lives such a warrior’s code. He’s such an enigma in the sense that this dude’s got that haircut, he’s a samurai, and he just was like basking in it. So I think we saw a different side of Jiri Prochazka.

“Does he bring stability? I think that he can defend this title. I’ll favor him against Jan Blachowicz, and I like Jan Blachowicz. But there’s guys in this weight class: Anthony Smith, Magomed Ankalaev, those guys that would seem to be matchup issues for Jiri Prochazka. But after Saturday, that was a nightmare matchup for him, and he navigated that, and he won the belt, so I do not question that this guy is going to be good for a long time.”

Blachowicz, who was cageside for Prochazka’s title-winning performance, wasted no time by facing off with the newly crowned champ. Cormier likes the idea of Blachowicz being next in line and wants to see the fight take place in Europe.

“This is only his third UFC fight, and he is now the UFC champion,” Cormier said of Prochazka. “So he’s fantastic, and I believe that he can defend this title, and I think Jan Blachowicz is gonna be next for him.”

He continued, “Everybody tries to set the next thing. This time, though, the next thing is the right thing. With Jan Blachowicz and an ability to go home to Europe and put on a massive fight that literally can take place in front of a stadium.”