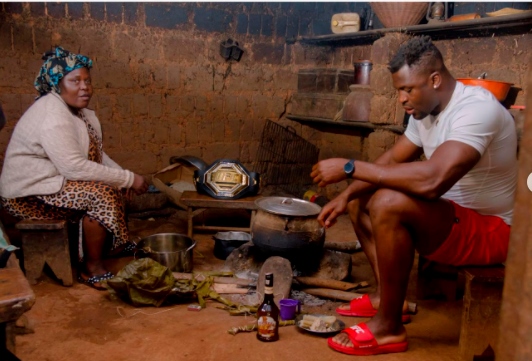 Francis Ngannou added some new decor to his traditional kitchen.

Francis Ngannou reminded himself of what he’s trying to hold onto by putting his belt up in his family’s kitchen.

Over the course of the next few weeks there’s going to be a lot of talk surrounding Francis Ngannou and what his future looks like beyond UFC 270. At that event, ‘The Predator’ will defend his title against top contender, former teammate and interim champion Ciryl Gane.

Ngannou’s contract situation has been a source of great debate as he continues to flirt with the idea of heading over to pro boxing for a stint inside the squared circle.

“Added some new decor to our traditional kitchen,” posted Ngannou on Instagram.

The UFC heavyweight championship is one of the greatest prizes you could hope to claim in mixed martial arts and for the last 10 months, Francis Ngannou has been the man to hold it.

Gane is going to try and take that away from Ngannou. However, given how hard ‘The Predator’ has worked to get back to this point, we’d imagine he isn’t going to go down without a fight.

How did Francis Ngannou reach the summit?

A 6-0 streak to begin his UFC career put ‘The Predator’ on track for a heavyweight title shot against Stipe Miocic at UFC 220. On that night, he was humbled and easily beaten by the champion via unanimous decision. Ngannou’s next fight against Derrick Lewis didn’t go well either, ending in a decision loss.

Ngannou needed to regroup and that’s exactly what he did by rattling off wins over Curtis Blaydes, Cain Velasquez, Junior dos Santos and Jairzinho Rozenstruik to book another date with the aforementioned Miocic. The champion had just been through a grueling trilogy with Daniel Cormier.

The stars aligned perfectly for Ngannou and at UFC 260, his destiny was fulfilled. ‘The Predator’ knocked Miocic out at the second time of asking to become the new king of the division.

Now it’s up to Ciryl Gane to try and knock him off of that pedestal.