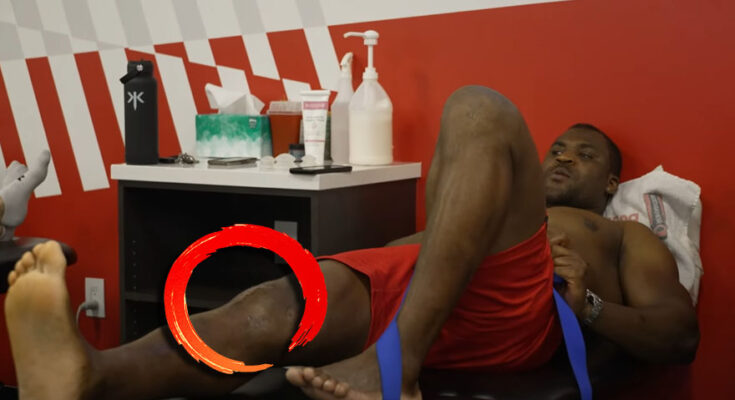 UFC heavyweight champion Francis Ngannou revealed he is slowly recovering from the knee surgery he underwent after fighting Cyril Gane at UFC 270.

Ngannou (17-3) unified the UFC heavyweight championship by defeating Ciryl Gane (10-1) by unanimous decision at UFC 270 in Anaheim, California. Immediately after, Ngannou revealed he went into the five-round bout with an injured knee. He suffered a torn MCL and damaged ACL during sparring sessions in the build-up to the fight.

Francis Ngannou is coming off significant knee surgery that saw surgeons repair his fully torn MCL and damaged ACL ligaments. Knee injuries like that can keep an athlete out of action for over a year, but Ngannou seems to be progressing well in his recovery.

In a new video on Francis Ngannou’s YouTube channel, the UFC heavyweight champion shared footage from one of his rehab sessions which he’s been doing twice a day, two hours a day, five days a week.

Ngannou described the progress he’s made since going under the knife in mid-March. He said:

“Now I can drive by myself. I’m off crutches, you know? It’s very relaxing now compared to the first two or three weeks, that was horrible. Couldn’t drive, couldn’t walk, even to just grab something in the fridge. It was a hell of trouble. But now I kind of do everything on my own which is good. Not 100%, but I’m still good. Still pain at night, but not as much as the beginning.”

“In two three months, I’ll be happy enough to train, to pick up a little training. Just a little, like jogging. I’m not strong enough to [spar], I think I better just give it enough time to heal up at once, so I don’t have to redo it. Because if I try to force it earlier, I think I might have to redo it, go over it again. So I better give it the time that it takes. I rest a lot, I’m not a pressure guy. I’ll just relax, just know when to do what I have to do, and how to do it properly.”

‘The Predator’ might not be so eager to leave if the UFC was more willing to pay fighters properly for big fights, according to Luke Rockhold. The former Strikeforce and UFC middleweight champion has had his own issues with fighter pay, and told Helen Yee:

“Stop fighting these guys for the paychecks and just pay them. Francis, paid. Jon, paid. So and so, paid. Pay pay pay pay pay. Pay it up. Let’s go fight but you gotta pay us.”

Check out Francis Ngannou discuss the rehabilitation of his knee following surgery below: