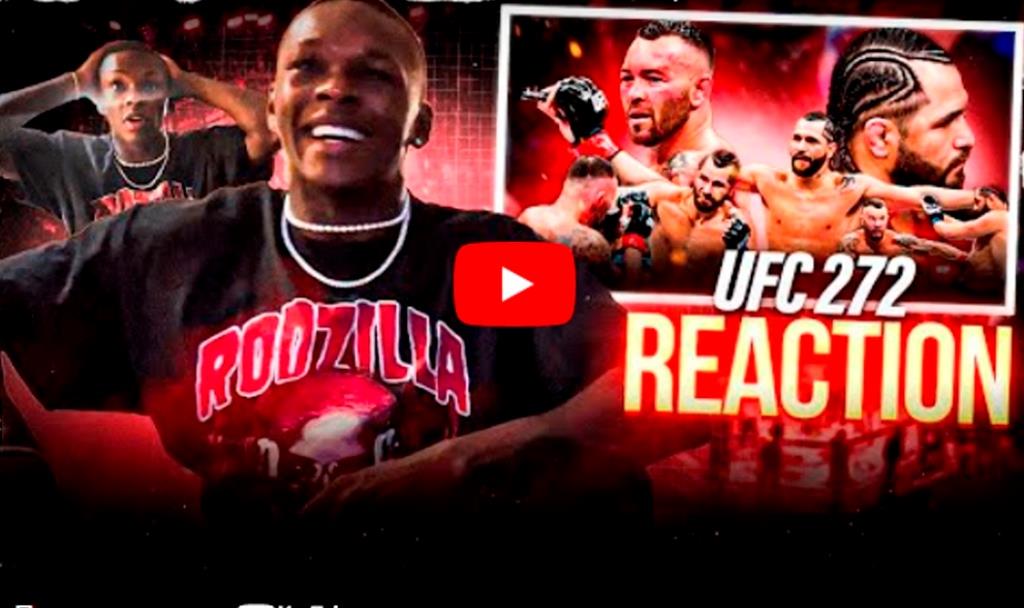 Israel Adesanya was closely watching when Colby Covington faced Jorge Masvidal in the main event at UFC 272. Adesanya was seemingly rooting for Masvidal even though he enjoyed the fight.

The UFC middleweight champion looked frustrated as Masvidal failed to defend repeated takedowns from ‘Chaos’. He also found it essential that ‘Gamebred’ take the center of the octagon at the very beginning of each round.

While Adesanya couldn’t be present at the event, his friend Dave Blakamoto reported live from the T-Mobile Arena in Vegas. ‘Stylebender’ flailed his hands in despair as the fight ended with Masvidal losing.

Watch Izzy’s live reaction to Covington vs. Masvidal below:

Colby Covington dominantly out grappled Jorge Masvidal on his way to a unanimous decision victory at UFC 272. While ‘Gamebred’ initially displayed a sound takedown defense, Covington started to get the better of him as the fight progressed.

Although Masvidal’s arsenal included a variety of kicks, his boxing didn’t look its best. ‘Gamebred’ almost landed a game-changing counter in round four, sitting Covington down on one knee. However, he couldn’t follow up on the opening with an empty gas tank.

Israel Adesanya had predicted Masvidal to emerge victorious against Colby Covington. While some predicted a dominant wrestling show from ‘Chaos’, Izzy was confident in Masvidal’s striking. ‘Stylebender’ told TMZ Sports in the lead up to UFC 272:

Jorge Masvidal certainly wasn’t happy about his loss to Colby Covington, considering the lead-up to their grudge match. Covington dragged Masvidal’s family into the fray and also called him a communist despite knowing ‘Gamebred’s’ loathing for Fidel Castro.

While Masvidal refused to bury his rivalry with ‘Chaos’, he had to acknowledge his former teammate’s wrestling prowess. The 37-year-old said at the UFC 272 post-fight scrum:

“He’s a b—ch. That’s it. The b—ch can wrestle, though….I wrestled like s—t. I lost a lot of exchanges that if I’d won ‘em … on a technical level things could have gone a little different, you know? If I would have made him spend more energy in different takedowns.”

Watch Masvidal at the UFC 272 post-fight press conference below:

Masvidal is still one of the biggest names in the UFC. However, he has lost his last three fights, and it is to be seen what is next for ‘Gamebred’.