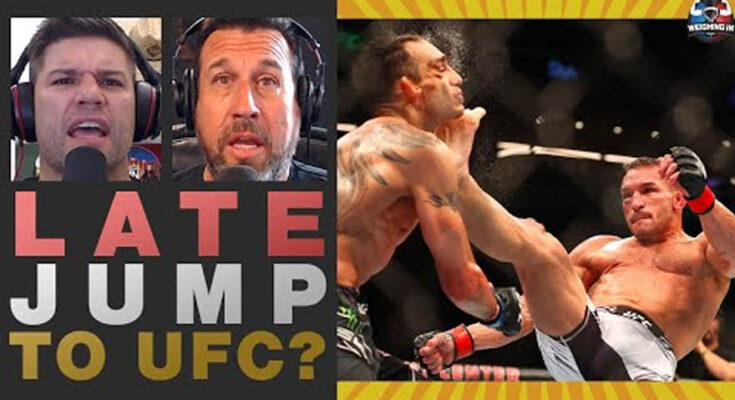 Host of the Weighing In podcast, John McCarthy and Josh Thomson, believe Michael Chandler’s window to become a UFC champion has closed.

Michael Chandler has taken the UFC by storm ever since he made his promotional debut against Dan Hooker in January 2021. However, he’s currently 2-2 in the octagon after bouts with fellow lightweight stars Charles Oliveira, Justin Gaethje, and Tony Ferguson.

The UFC lightweight contender and former Bellator champion brutally knocked out Tony Ferguson at UFC 274. The official stoppage came 17 seconds into the second round. The lightweight bout was part of the UFC 274 main card at Footprint Center in Phoenix, Arizona.

Both McCarthy and Thomson believe that Chandler’s recent run was a success. However, they are of the opinion that UFC gold will elude ‘Iron’ throughout his stint.

According to Thomson, Chandler’s best chance of winning a UFC title was around the 2014 range, when Eddie Alvarez came over to the promotion:

“If he would’ve came when Eddie [Alvarez] came, there’s a good chance he would have been the UFC champ. That’s the way I look at it. I mean, him and Eddie had battles and those were great fights. Eddie became UFC champ and Chandler for sure could’ve beaten Eddie and he could’ve beaten everybody else who was there that time.”

McCarthy agreed with his co-host’s assessment. According to the former UFC referee:

“I agree with what Josh was saying as far as I think that the time period for Michael to actually be the guy in the UFC was about four to five years ago. If he would’ve come when he was 29, 30, come over when Eddie had came over, it would have been a perfect time for him. He would’ve done extremely well.”