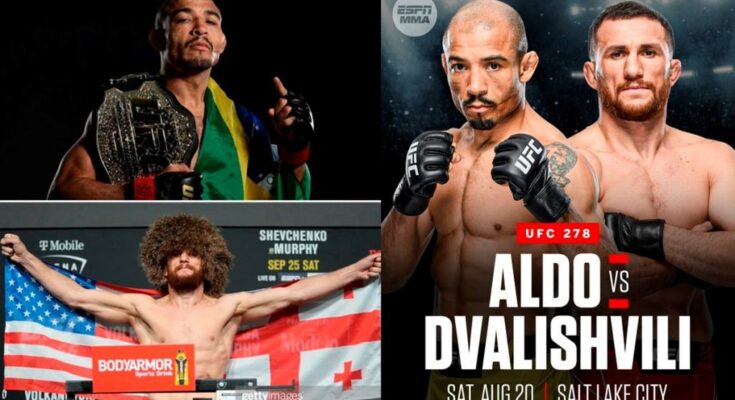 August’s UFC 278 has a key bantamweight bout in the works.

News of the match-up was first reported by Ariel Helwani; on Thursday, Dvalishvili confirmed the booking, with video of him signing his bout agreement emerging a short time later.

The news comes just as word of a bantamweight title fight between Dvalishvili’s teammate and current champ Aljamain Sterling and ex-champ T.J. Dillashaw began to make the rounds.

The Serra-Longo fighters have long insisted they will not fight one another, with Sterling suggesting earlier this year that he would vacate the title before that happens.

Jose Aldo (31-7 MMA, 21-6 UFC) rides a three-fight winning streak into the bout, including victories over Marlon Vera, Pedro Munhoz, and Rob Font. The streak that dates back to 2020 is Aldo’s best and only at bantamweight. After a reign as champion and then top contender at featherweight, Aldo dropped to 135 pounds in 2019. Since a 0-2 start to his divisional tenure, Aldo rallied and is now close once again to a UFC title shot.

Georgia’s Dvalishvili, a.k.a. “The Machine,” (14-4 MMA, 7-2 UFC) meanwhile has streaked up the divisional ladder following an 0-2 start to his UFC tenure. Dvalishvili rides a seven-fight winning streak into UFC 278. Notable wins include Marlon Moraes, Cody Stamann, and John Dodson. At UFC on ESPN 10, Dvalishvili broke the UFC/WEC bantamweight record for most takedowns in a fight with 13.

ESPN has Aldo ranked No. 4 and Dvalishvili ranked No. 7 in the world at bantamweight.

The following bouts have been reported for the card thus far: