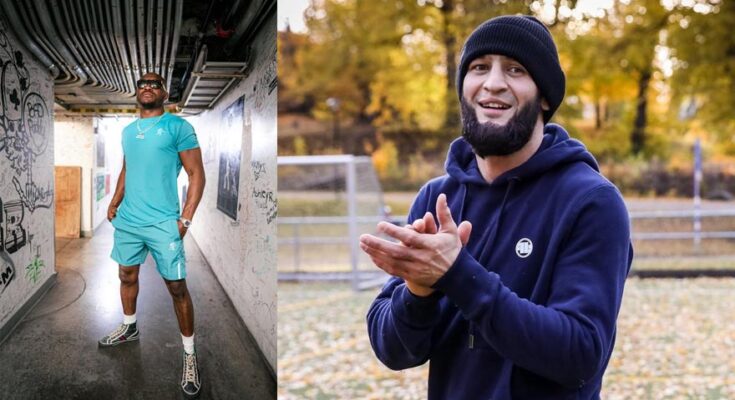 UFC welterweight champion Kamaru Usman of Nigeria declares that all fighters who want to challenge for his title must first defeat Colby Covington of the United States. According to Usman, this also applies to the prospect Khamzat Chimaev of Sweden.

Kamaru Usman believes Khamzat Chimaev and other welterweight contenders need to get past Colby Covington before they can get a title shot.

Usman is currently on the sidelines as he rehabs his hand injury. When he returns, it’s likely he will face Leon Edwards. After that, there is no clear-cut contender but Khamzat Chimaev is one fighter knocking on the door. Yet, Usman believes the Swede should have to go through Covington first.

“If I’m healthy and I get in there and am able to go in and go through a guy,” Kamaru Usman said to The Underground.

“Leon Edwards is a tough, tough guy, I know that, the world knows that. If I’m able to, God willing, I’m able to get through him very, very quickly I might decide, you know what give me someone next week. So, you never know. It’s relatively close, there are a lot of guys in the top division, you got Belal Muhammad is there, you’ve got Chimaev is there, and you’ve got Covington is still there holding that door strong.

“At this point, you know, Covington is standing right in front of that door. For it to really make sense, for anyone to be able to get through they need to be able to go through him,” Usman continued.

“He’s proven that he can beat everybody else, but he just can’t beat me. For you to prove that you can fight for the title I think you need to go through that guy. At the end of the day, I’m going to keep running through these guys until I’m bored. Whoever’s next is next.”

Currently, Colby Covington is on the sidelines after the alleged sucker punch by Jorge Masvidal. So, when he will fight is uncertain but Dana White had said he wanted to book mKhamzat Chimaev vs. Covington’ after ‘Borz’ beat Gilbert Burns.

So, it appears Kamaru Usman and Dana White are on the same page that in order to get a title shot fighters will need to get through Covington.