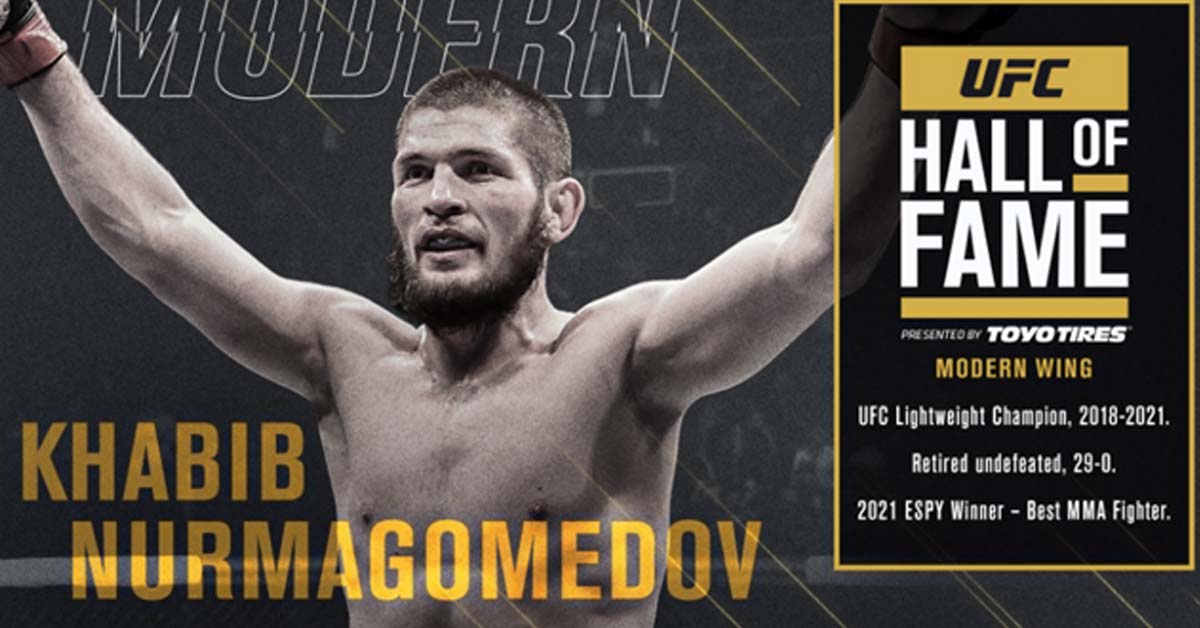 Khabib Nurmagomedov becomes first Russian in UFC Hall of Fame. The promotion has hailed its former champion as one of the greatest athletes ever.

MA lightweight great Khabib Nurmagomedov has made history by becoming Russia’s first ever inductee to the UFC Hall of Fame in an official announcement at in Las Vegas on Saturday.

The hugely popular fighter, who is now a promoter and coach, was guiding current figher Tagir Ulanbekov and watching his cousin, Umar Nurmagomedov, at the event.

Both Usman and Makhachev hugged Nurmagomedov when the news was confirmed before devout Muslim Muslim Nurmagomedov saluted the camera and pointed to the heavens.

In a statement, UFC president Dana White called the Dagestani “one of the greatest athletes to ever compete in professional sports”.

“No-one dominated their opponents that way Khabib did and to retire undefeated, as lightweight champion and the number pound-for-pound athlete in the world, is an incredible accomplishment,” added White. “It will be an honor to induct him into the UFC Hall of Fame this summer,” White added.

Nurmagomedov is set to be inducted as part of th 2022 class during the UFC’s International Fight Week in July.

The promotion released a two-minute highlights video showing Nurmagomedov’s rise from his 2012 debut in Nashville, where he submitted Kamal Shalorus via rear-naked coach, through to his 2018 capture of the lightweight crown against Al Iaquinta at UFC 223, a record-breakingly popular grudge match win over Conor McGregor later that year and his retirement in October 2020 after seeing off Justin Gaethje.

Nurmagomedov won all 24 rounds of his first nine bouts before finally earning his title shot, and stepped down from the sport to honor a promise to his mother that he would not continue following the death of his father and mentor, Abdulmanap.

The revered coach died from Covid complications in July 2020, and former fighter Michael Bisping raises a popular argument in the homage clip that Nurmagomedov possibly never lost a round in the UFC.

Nurmagomedov has consistenly dismissed talk of a comeback since bowing out and was left speechless by the announcement.

“It was like I don’t expect this, you know” the 33-year-old admitted after watching his cousin improve his record to 14-0 with a first-round finish of Brian Kelleher.

“I don’t expect this,” he added, turning away from the camera having asked: “What can I say?”

Nurmagomedov split his time between California’s world-famous American Kickboxing Academy, where he became great friends with two-division champion Daniel Cormier and was coached by Javier Mendez, and his home in Dagestan during his career.

The Modern Wing of the hall of fame that he will join is made up of other fighters who turned professional after November 17 2000.

That means he will stand alongside the likes of Forrest Griffin, BJ Penn, Urijah Faber, Ronda Rousey, Bisping, Rashad Evans and Georges St-Pierre.

Inductees need to be over 35 or have been retired for more than a year to join.

Nurmagomedov fell into the retired category after White finally accepted his retirement in 2021, freeing up the lightweight strap now owned by Charles Oliveira.

Other top honors Khabib has received include ESPN’s Excellence in Sports Performance Yearly Award Award for Best MMA Fighter in 2021 and the UFC’s Honors Submission of the Year in 2020, when he also won BBC Sport’s World Sport Star of the Year.

He was named Russia’s Best Sportsman by the Russian Public Opinion Research Center in the same year.

In 2019, Nurmagomedov and Abdulmanap were presented with the highest merit of the Republic of Dagestan by its then-head, Vladimir Vasilyev.

Since hanging up his gloves, Nurmagomedov has gone into coaching and is now the figurehead for his Eagle FC company, which has recently expanded to the US while picking up ex-UFC fighters such as Kevin Lee.

Khabib Nurmagomedov shared a video with a charming moment with a Little Fan.