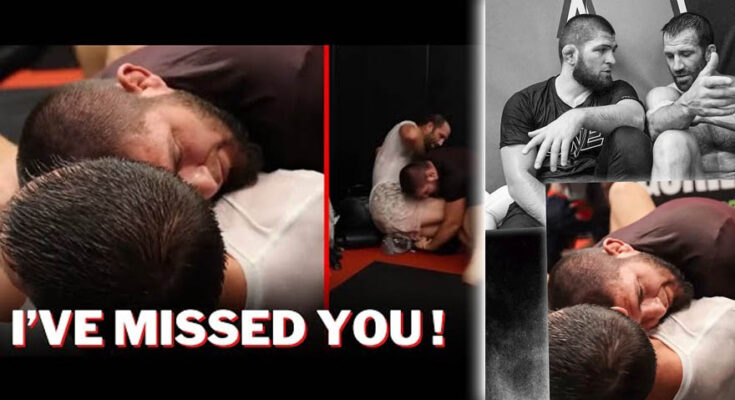 Khabib Nurmagomedov is back on the mats at the American Kickboxing Academy in San Jose.

It is clear that Khabib’s competitive fires still burn after recent footage of him grappling with longtime training partner Luke Rockhold surfaced online.

Khabib Nurmagomedov might be a retired fighter nowadays but that certainly hasn’t stopped him from dominating in the training room.

The former UFC lightweight champion confirmed his retirement from mixed martial arts in early 2021, several months after first stating that he was stepping away from the sport following a decisive submission win against Justin Gaethje.

The undefeated Russian star resisted several calls from UFC president Dana White to return to the cage in pursuit of a final win to make his 29-0 record a little more symmetrical to instead concentrate on various other business ventures, including the Eagle FC fight promotion he fronts.

“If Sambo was easy… It’d be called Luke Rockhold,” Khabib jokes in the footage, riffing on an infamous joke about Brazilian Jiu Jitsu. “It’s okay. Ask Luke what happened today.”

“I just miss you, I hug you brother,” adds Khabib in a separate video, which also surfaced via Rockhold’s social media.

The American, though, gets in a few one-liners of his own, telling the Russian great to “keep practicing!” as he rises to his feet – only for Khabib to take him down once again.

Both men are former UFC champions, with Rockhold once the titleholder at middleweight and Khabib at lightweight – but Nurmagomedov joked that there isn’t too much a size disparity nowadays.

Submission expert Rockhold has long been impressed with Khabib’s prowess on the ground, previously saying of him last year: “I’ve never had a ‘55 pounder come and chase me around the gym and want to grapple me – and actually compete with me! Khabib is a real competition for me in a grappling match.

The footage shows that Khabib is still more than capable of handling his peers when it comes to grappling arts – but sadly, it appears as if this is as close as we will ever come to the Dagestan superstar competing in the cage once again.

Chael Sonnen has reacted to a video of former lightweight champion Khabib Nurmagomedov successfully grappling against middleweight Luke Rockhold. Praising the skills of Nurmagomedov, Sonnen admitted that he thinks he would struggle to grapple with Rockhold as well as the Russian is. The former UFC middleweight champion is currently training for a fight against Paul Costa in August.

“A training video came out of Khabib on the ground with Luke Rockhold. Now, it’s not fair to do these. Because we have no idea the context. It could have been 10 minutes of fair and straight up. Luke’s fresh, Khabib’s fresh, a few minutes later someone grabs the other for 30 seconds. We just don’t know. Either way, I saw Khabib in one of these situations that I’ve only heard about. I’ve never seen Khabib except for in competition against a 155er. I could not do to Luke what Khabib did to Luke.”

Although aware that the videos are only short glimpses of what was otherwise an intense training session, ‘The American Gangster’ jokingly questioned whether or not ‘The Eagle’ could beat him up. Sonnen fought at both middleweight and light heavyweight during his career, similar to Rockhold.

“Rockhold is a bear. He’s a bear on the ground… Luke is good. Luke is really good on the ground. I could not hold Luke down like Khabib did… There’s things I couldn’t do. Could Khabib whip my a**? He’s a 155er, he’s too small right? I could deal with Khabib, right?”