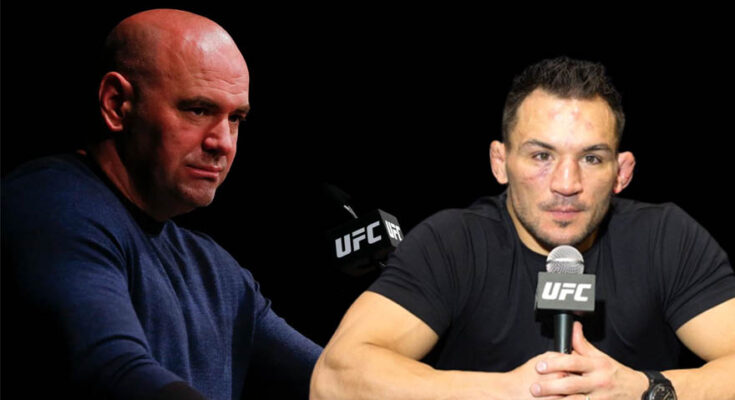 Over the last few months, the UFC and Dana White have been blasted over what they pay fighters. Names such as Jake Paul have seemingly declared war on the company to raise pay. Others, such as Anderson Silva, have blasted the UFC for a similar reason.

One man who doesn’t think that way is Michael Chandler. The former Bellator lightweight champion signed to the UFC in 2020 and seems happy. Through four fights in the octagon, he’s transformed himself into one of the faces of 155 pounds. It’s likely because of his good relationship status in the UFC that he doesn’t see an issue with Dana White.

Michael Chandler discussed UFC fighter pay on the How U Livin J Piven podcast. While he admitted that he was paid more in Bellator, he’s had many doors opened for him since joining the UFC. He also raised the point that Dana White has sacrificed a lot to run the promotion.

“I have been able to monetize things outside my fights. You always see guys on the microphone saying the UFC should pay more, or the media saying the UFC should pay more, and it’s never the guys who are out there having their own YouTube channel, getting roles in movies, building fitness and wellness lifestyle programs, selling merch, doing all of the different things that we can do as fighters because we’re independent contractors.”

“I don’t have a problem with the ‘fighter pay argument,’ people think that we should make a lot more money because the UFC makes a ton of money on their shows.”

“Well the UFC has been at it since 1993. Dana White has had 10,000 sleepless nights when us fighters are just showing up to practice, going to bed, laying our head on the pillow and getting after it and getting paid a decent wage for what we do.”

Other top names like Sean O’Malley also support the “build your own brand” narrative.

Most state athletic commissions have ended the practice of releasing UFC fight purses to the MMA media; however, multiple reports have Chandler making upwards of $400,000 for his UFC 268 bout against Justin Gaethje, which includes sponsorships and bonuses.