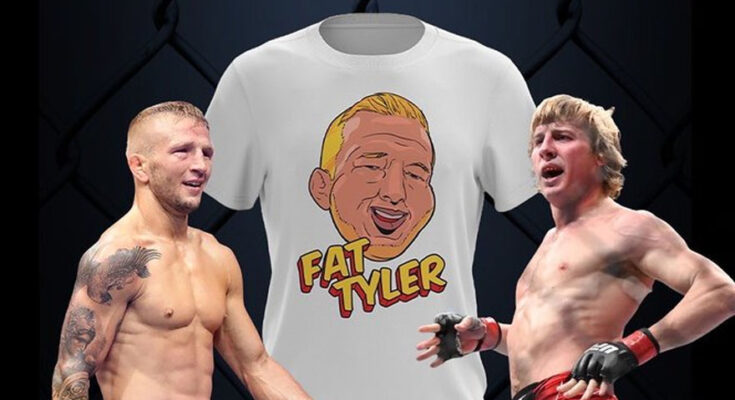 Recently, the former bantamweight champ in Dillashaw did an interview where he was asked about Pimblett and he wasn’t high on him. He claimed the Brit would never be a UFC champion due to him getting fat outside of camps.

Paddy Pimblett (18-3 MMA), an up and coming lightweight star in the UFC, is apparently notably out of shape between fights. It has been reported that the Brit ballooned up to 202 pounds following his last bout with Kazula Vargas (12-5 MMA) in March of this year.

Speaking on ‘The Schaub Show’, TJ Dillashaw had this to say about the Liverpool fighter

“He’s just loving diabetes. That’s like a recipe for destroying your body. I guess there’s one thing when I look at it: They can promote him the right way and do all this good stuff, and he’s got some stuff to grow and get into the higher echelons of the UFC, but if you keep that same work ethic that he has now, he’ll never be a champion.”

“You can’t have that down time like that. You can’t get that fat. You can’t get out of shape. It just proves the dedication to what you need to do. I’m not trying to pound on him or anything, but that’s something I think he’s going to have to figure out with age. He’s young. It’s a full-time job. This isn’t just wanting to be a fighter; you have to be a fighter.”

After those comments, Pimblett and Dillashaw then had a back-and-forth on social media criticizing one another.

“Is this fella messin @TJDillashaw used to sell tee shirts with his fat face on it saying “fat Tyler” on when he came out of camp don’t forget ur own past u sausage Cheating little juice head wud never have won a belt without them steroids u f*****g mushroom,” Pimblett tweeted.

Dillashaw then took to Instagram to respond to those comments and claimed he wasn’t trying to be mean.

“Wasn’t even trying to be mean. @theufcbaddy getting all sensitive, must be a tasty subject. Drop the donuts and take the advice. The only difference of fat Tyler is that it was a joke lol. What’s not a joke is you getting diabetes. Let’s see how you look after 11 years in the UFC, good luck lasting that long,” Dillashaw wrote about Pimblett.

Although TJ Dillashaw said he wasn’t trying to be mean, Paddy Pimblett once again took to Twitter to rip the former champ for taking EPO and tainting his legacy.

“Not as sensitive as ur body to that EPO when u cheated. still didnt win what an embarrassment u are I’ll still be here in 11 years if I haven’t already retired with a proper legacy not tainted like urs & also a lot more money in my pocket than you’ve ever earned night son,” Pimblett added.

After this recent tweet, it seems the feud between Pimblett and Dillashaw doesn’t seem to die anytime soon. As for their fighting careers, Pimblett will face up against Jordan Leavitt (10-1 MMA) on July 23, 2022 at UFC London, while Dillashaw will likely face Aljamain Sterling.