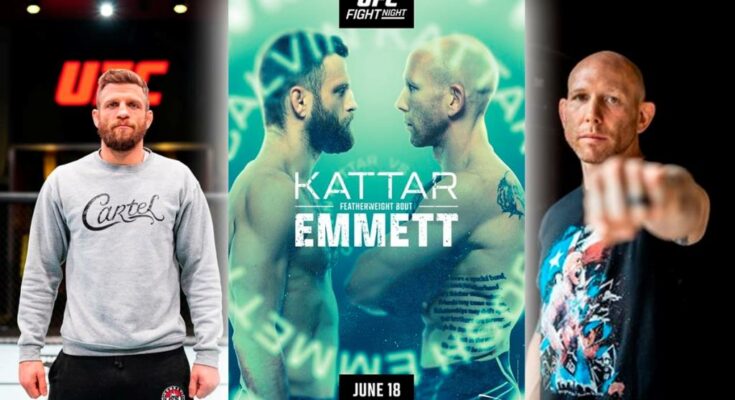 UFC Fight Night: Calvin Kattar vs. Josh Emmett will be the next Fight Night offering from the MMA juggernaut and there are some exciting matchups lined up for the fight fans. The event is set to go down this Saturday, June 18, at the Moody Center in Austin, Texas.

In the main event, No.4-ranked featherweight contender Calvin Kattar will go head-to-head against No.7-ranked Josh Emmett in a featherweight showdown.

The co-headliner of UFC Fight Night this weekend will see 54-fight veteran Donald Cerrone return to take on Joe Lauzon in a lightweight clash.

In the main event of UFC Austin, top-10 featherweights are set to headline the card as Calvin Kattar takes on Josh Emmett. Heading into the fight, Kattar is a massive -260 favorite on FanDuel while Emmett is a +196 underdog.

Pro fighters made their picks for Calvin Kattar vs. Josh Emmett at UFC Fight Night- June 18, 2022

Grant Dawson, UFC lightweight: That is a good fight but I think you have to take Kattar. Josh Emmett is a beast and has insane power, both of them are underrated but the length and boxing of Kattar and how he looked against Giga, I can’t see him losing this one.

Chris Curtis, UFC middleweight: I have to go with Calvin Kattar, he’s a fellow CES alum. He’s such a great boxer and I love the way he fights.

Brandon Royval, UFC flyweight: I’ll go with Calvin Kattar, his boxing is better than Emmett’s and he can mix in the wrestling to win.

Jeff Molina, UFC flyweight: Kattar looked good in his last fight and I don’t see where Emmett beats him. Kattar has a chin on him and is a great boxer, I’ll pick Kattar.

Dan Ige, UFC featherweight: It’s a good fight, honestly I’d have to favor Kattar a little more. Emmett has the ability to KO anyone but it’s a hard game plan to have against Kattar to KO him. It will be a good fight but Kattar’s volume will be the difference.

Gabe Green, UFC welterweight: Kattar, his boxing is too clean and he can avoid the power shots.

Damon Jackson, UFC featherweight: Josh Emmett is tough but Kattar has crisp boxing. I think Kattar is more technical but Emmett has more power, I think Kattar wins on the decision. But, if there is a finish I think it’s Emmett winning.

Tyson Nam, UFC flyweight: Kattar, his boxing is so crisp and on point and can out volume Emmett over five rounds.

Christos Giagos, UFC lightweight: I’m going to go with Josh Emmett, I’ve fought him and he’s such a powerful striker.

Ode Osbourne, UFC flyweight: Kattar for sure, he has the better boxing and can mix in the wrestling as we saw in the last fight.