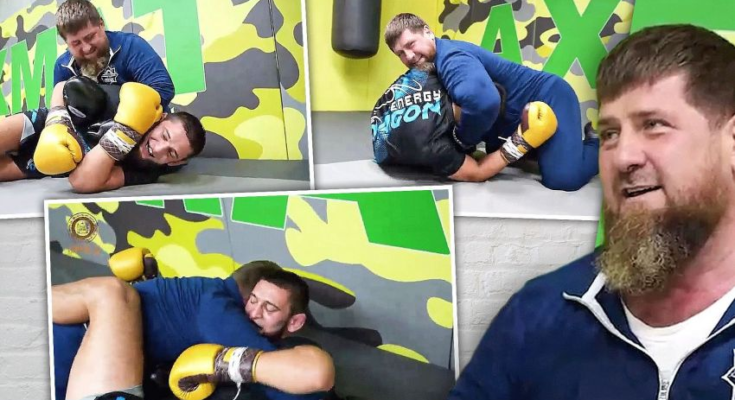 The third UFC welterweight Khamzat Chimaev trained with the head of the Chechen Republic Ramzan Kadyrov and his sons.

Like many fighters hailing from the Caucasus region of Russia, Chimaev has been actively courted by Kadyrov since his rise to UFC stardom.

The iron-fisted ruler famously coaxed Khamzat out of retirement during his near-death spell with COVID-19, reportedly gifting him a Mercedes SUV as incentive. He even attended his favorite fighter’s secret wedding as a guest of honor earlier this month.

Now Kadyrov has released footage of a friendly sparring session in which he’s shown manhandling Chimaev and forcing the #3-ranked UFC welterweight to tap. The video also shows Khamzat sparring with Kadyrov’s sons, who like their father somehow held their own against one of the UFC’s most feared fighters.

Chimaev’s style was markedly different from his usual manner of fighting in the octagon. “Borz” was clearly cautious and allowed Kadyrov’s children to hit himself.

Then it was Khamzat’s turn to fight the head of Chechnya himself. At first the UFC fighter missed a lot in the standing position, and then the action moved to the ground. There Kadyrov had an obvious advantage and, having caught Chimaev in a choke hold, he made him tap to surrender.

“Grandchildren of the First President of the Chechen Republic, Hero of Russia Akhmat-Khadzhi Kadyrov – Adam and Eli Kadyrov met face to face with the thunderstorm of the octagon. Despite the fact that this is only a friendly sparring, the “Chechen Wolf” exhausted his rivals in his usual manner, once again proving his skill and composure in the fighting arena,” wrote Kadyrov on Instagram.

“Despite the formidable and eminent opponent, the guys were in no way inferior to Khamzat in skill. As befits the fighters, they analyzed the movements and weaknesses of the opponent, after which they proceeded to counterattacks. At the end of the training, I myself could not resist the temptation to test my strength in a friendly duel with our dear BROTHER.”

It should be noted that Hamzat Chimaev is not the first fighter with whom Kadyrov trains in such a way. Earlier Alexander Emelianenko acted as his sparring partner.