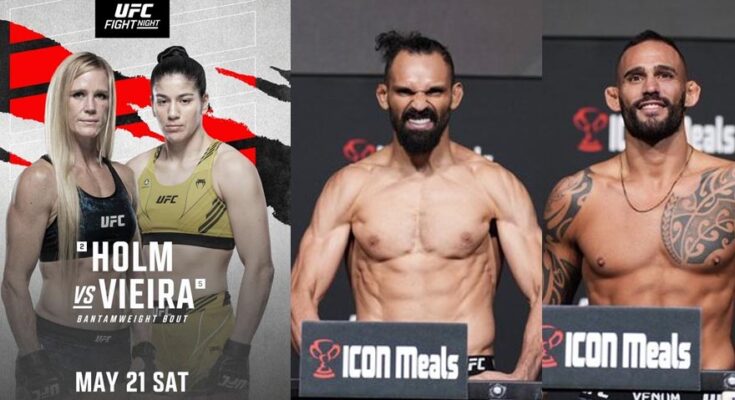 UFC Fight Night 206: Holm vs. Vieira will be live from UFC APEX in Las Vegas this Saturday, May 21, with both Prelims and Main Card on ESPN+ (English and Spanish).

In the main event, former champion and #2 ranked contender Holly Holm (14-5) fighting out of Albuquerque, NM will attempt to extend her two-fight win streak and reinsert herself into the title conversation. She will meet #5 Ketlen Vieira (11-2) fighting out of Manaus, Amazonas, Brazil intends to snatch Holm’s spot in the rankings in her second consecutive UFC main event.

Both fighters stepped on the scale during Friday’s official weigh-in window, with Holm registering at 135.5 pounds, and Vieira clocking in at 136 pounds. Now the five-round fight can proceed as planned.

Holm, No. 4 in the latest USA TODAY Sports women’s bantamweight rankings, hasn’t seen action since a unanimous decision win over Irene Aldana at UFC on ESPN 16 in October 2020. She’s been on the sidelines with injuries and health issues, and is now set to return and compete for the first time since turning 40.

No. 9-ranked Vieira will attempt to derail Holm’s comeback in defeat a former UFC champion for the second consecutive fight. The 30-year-old Brazilian is coming off a unanimous decision win over Miesha Tate at UFC Fight Night 198 in November.

Also on the card, a welterweight matchup will see the #14 ranked Santiago Ponzinibbio (29-4) fighting out of Coconut Creek, Fla. aims to defend his spot in the Top 15 against the surging Pereira. His opponent, Michel Pereira (26-11) fighting out of Las Vegas, NV. hopes to further cement his welterweight run and break into the rankings for the first time.

Among those weighing in are former women’s bantamweight champion Holly Holm and her main event opponent Ketlen Vieira. Co-main welterweight competitors Michel Pereira and Santiago Ponzinibbio are also among the 22 fighters recording their official weight.