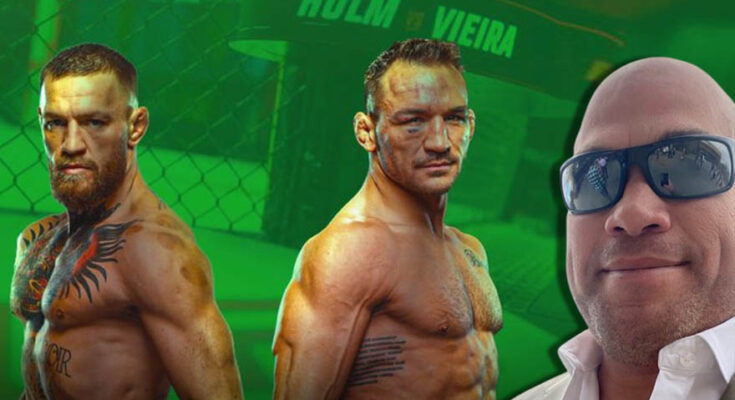 Over the past few months, several fighters have been calling out former UFC lightweight and featherweight champion Conor McGregor. Michael Chandler was the latest to challenge the “Notorious” one following his big win over Tony Ferguson at UFC 274. He is willing to wait as long as it takes.

McGregor is recovering from a broken tibia he suffered in a TKO loss to Dustin Poirier at UFC 264 in July 2021. McGregor couldn’t move off the canvas, so he did his postfight interview with Joe Rogan while on the floor. Since then, McGregor has been healing and preparing for a return.

UFC president Dana White provided an update last month on McGregor, saying that the Irish fighter is ready for his comeback.

“He’s chomping at the bit to come back,” White told TMZ Sports (via SportsNaut). “Realistically, when you look at everything he’s got going on right now with coming back and other things that need to be done to get ready to prepare again, [a return timeframe is] probably early fall.”

Conor McGregor has been entertaining the notion of having his UFC comeback fight with ex-lightweight title contender Chandler, but has been told that it may not be a wise idea.

UFC legend Tito Ortiz believes Conor McGregor should hold off on fighting Michael Chandler in his MMA comeback due to his similarities to Khabib Nurmagomedov.

McGregor has been entertaining offers for his first fight back following a leg break last summer at the hands of Dustin Poirier, with Chandler emerging as one of the front runners. However, the former Bellator champion is a known star wrestler, which Ortiz warns could cause the Irishman trouble.

The former two-weight world champion has struggled with wrestlers in the past, even when he was as low as 145lb and facing Chad Mendes during his rise through the ranks. And he was completely dominated by Nurmagomedov in their 2018 bout, which Ortiz believes could be similar to a future meeting with Chandler.

“It doesn’t make sense for Conor McGregor,” Ortiz told Helen Yee Sports. “Chandler is a wrestler who can strike. That’s not Conor’s strength. Khabib really showed that and what he can do with it.

“Poirier also showed what he can do with wrestling also and with striking. For Conor to come back after the injury he had, I have nothing but respect for the guy. The guy has a steel rod in his leg and still wants to come back and compete.”

Another stumbling block for the Chandler fight, which would be one of the most exciting the UFC could make on paper, is that McGregor has insisted he will return at welterweight. The American is a top contender at lightweight, and hasn’t made the move up since very early in his career.

But he vowed to make his move up to 170lb during a post-fight promo following his victory over Tony Ferguson at UFC 274 if it meant getting a fight with McGregor. “I’m ready to come back,” he said during his interview. “The main event; there is not one MMA fan who doesn’t want to see me rematch you Charles or rematch you Justin Gaethje.

“If the UFC have a momentary lapse and give the title shot to someone else, I’ve got one dude on my mind. Conor McGregor, I am the most entertaining lightweight on the planet. I want you at your baddest and I want you at your best; you and me at 170lb.”

McGregor has said that he would gladly face Chandler, although perhaps not in his next fight. “I’d have a nice knock off this guy, no doubt about it,” he tweeted. “A firework spectacle. I like the 170 shout also. Tipped him over. I’m definitely game to fight this guy at some stage in my career. I see it happening after tonight. Congrats on a solid win Michael and another barnstormer.”

Chandler has gone 2-2 since moving from Bellator to the UFC. He defeated Dan Hooker before losing his quick title shot against Charles Oliveira and a barn-burner in New York with Justin Gaethje before returning to the win column against Ferguson.