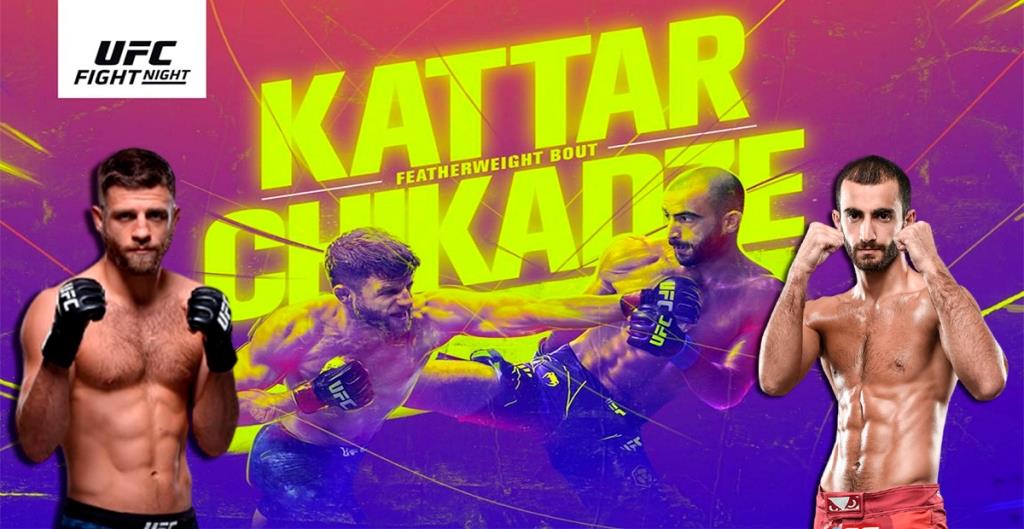 This Fight Night is pretty low on name value thanks to a number of fight cancellations, but with a huge featherweight main event, it should still be worth watching.

So with that in mind, here are the predicted outcomes for this weekend’s Fight Night event.

Initially, this fight simply looked like an exciting one between two of the promotion’s better 145 lbs fighters. With last week’s announcement that Max Holloway is out of his upcoming featherweight title fight with Alexander Volkanovski, things have gotten a little more serious.

Despite Kattar being ranked No.5 and Chikadze ranked No.8 in the division, there’s a very real chance that the winner would have the best argument for replacing Holloway in the upcoming title bout. That means there are big stakes on the line.

Kattar hasn’t fought since his loss to Holloway last January. In fact, by the time he steps into the octagon this weekend, it’ll be almost a year to the day that he was beaten by ‘Blessed’.

The Bostonian has now been a part of the promotion’s roster for over four years, and for the most part, he’s been very successful. He’s put together a record of 6-3, and has beaten the likes of Ricardo Lamas, Jeremy Stephens and Dan Ige.

Unfortunately, Kattar’s three losses have all followed a similar pattern. He’s an excellent striker who primarily uses his boxing and possesses brutal power in his shots. However, he seems to struggle with more dynamic fighters who can use angles to either outstrike him or take him down.

So, does Chikadze possess those skills? Based on what we’ve seen of him thus far, it feels likely.

‘The Ninja’ has put together a run of seven straight wins since arriving in the octagon in late 2019. Few fighters enjoyed a better 2021 than him as he defeated tough veterans Cub Swanson and Edson Barboza, both via TKO.

The Georgian is a renowned kickboxer with truly explosive skills. While it took him time to find his best form inside the octagon, he now looks fully comfortable both on the feet and on the ground.

His fight with Barboza, for instance, showed him to have incredible poise under pressure, and the finish was phenomenal.

Essentially, you’d have to favor Chikadze in this fight. Kattar definitely has the punching power to hurt him, but it might be hard for him to catch his faster opponent, and it’s more likely that he’ll be on the defensive from the off.

Kattar is clearly tough, considering he took an absolute beating from Holloway and wasn’t finished, but the likelihood is that this will be another tricky night for him.

The pick: Chikadze via unanimous decision

This one is an odd fight in that while both women are very highly ranked in the UFC’s flyweight division, with Katlyn Chookagian at No.2 and Jennifer Maia at No.4, it seems unlikely that a title shot lies in the future for either of them, even if they win impressively.

That is, of course, because both women have lost handily to UFC flyweight champion Valentina Shevchenko in recent years. Maia performed a little better than Chookagian against the champion. She survived for five rounds, while ‘Blonde Fighter’ was stopped in the third round.

Does that mean that Maia has an advantage in this clash? It’s tricky to say, to be honest. It’s true that she definitely possesses better finishing skills, even if we haven’t really seen that in the octagon just yet outside of an armbar win over Joanne Wood.

Overall, the Brazilian is dangerous in all areas. She’s a genuine black belt in Brazilian jiu-jitsu with dangerous submission skills, holding five wins via tapout in her career. While she doesn’t seem to possess much knockout power, she’s a good striker from a technical standpoint.

The big question here is whether she can work out how to get around the size disadvantage she’s going to have. Standing at 5’4”, Maia is going to be giving up a five inch height and four inch reach to Chookagian, who has used this to her advantage in previous fights.

‘Blonde Fighter’ isn’t a finisher by any means. All nine of her UFC wins have come via decision. However, she’s more than capable of keeping an opponent at the end of her strikes and she’s also capable of blanketing them from top position too.

Essentially, given she isn’t the most explosive fighter in the division, it’s hard to see Maia being able to prevent Chookagian from pulling off her usual gameplan – either grounding the Brazilian for a decision or using long punches and jabs to pick her apart.

So, while it’s unlikely to be completely easy for her, the pick is Chookagian via decision.

The pick: Chookagian via unanimous decision

UFC flyweights Brandon Royval and Rogerio Bontorin are also set to feature on the main card. This should be a good fight between two of the division’s more talented fighters. Although Royval has suffered two straight losses, they came against two of the better flyweights in the promotion in Brandon Moreno and Alexandre Pantoja.

Bontorin has some strong wins in his own right. He has beaten the likes of Raulian Paiva and Matt Schnell. Despite this, Royval’s size, power and overall aggression should give him the edge here. Royval via decision is the pick.

At heavyweight, Jake Collier takes on Chase Sherman. Neither of these fighters looks likely to enter title contention any time soon. In fact, it’s somewhat of a question mark how they’ve made the main card given Sherman has lost his last two fights and Collier is 1-2 since the start of 2020.

The bout likely made it to the main card due to the likelihood of it being a brawl, so the only hope is that it doesn’t become a slow and crude one. Sherman has a size advantage, though, and has proven that he can hit hard. He’s also not that slow and sloppy for a big man, which should give him the upper hand. Sherman via TKO is the pick.

Finally, Bill Algeo welcomes newcomer Joanderson Brito to the promotion in the featherweight division. Algeo is probably more talented than his UFC record of 1-2 suggests, as he’s both a tricky striker and strong on the ground too.

Brito is more unknown, but he looks like a dangerous prospect. He has finishing skills in all areas and also looks to be a relatively big featherweight. However, he hasn’t yet faced the competition that Algeo has. Therefore, Algeo by decision is the pick.

Picks in bold and in red