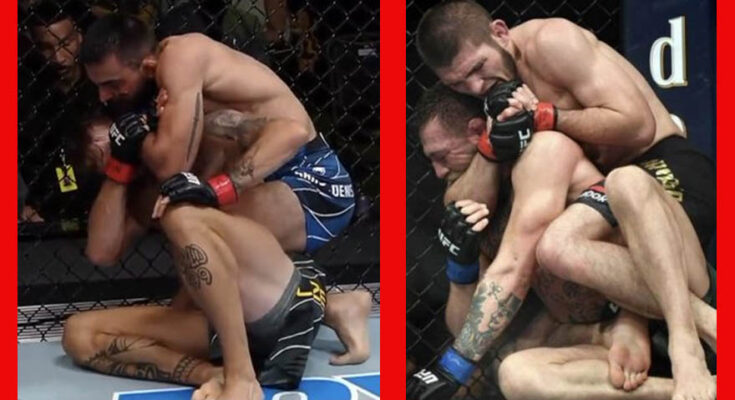 Las Vegas, NV — European MMA was well represented when UFC lightweights and Niklas Stolze and Benoit Saint-Denis met in the octagon at UFC Vegas 56 on Saturday.

Germany’s Stolze was riding a two-fight losing streak and acknowledged in an interview with Cageside Press that he knew he was fighting for his job at UFC Vegas 56. With an 0-2 record in the UFC fighters know that a losing streak is grounds for concern for both them and the promotion.

Saint-Denis, from France, made his promotional debut in a loss at UFC 267 having come into the promotion undefeated. He was looking to bounce back Saturday, and potentially earn a spot on the Paris card in September.

Early on, Saint-Denis ate a well-timed knee while changing levels for a takedown. But the French fighter pushed through, getting Stolze to the ground. Stolze had his back to the fence and tried to wall-walk up, but Saint-Denis pulled his legs out from under him, and fired a shoulder strike and some knees to the thigh.

The ref would then halt the action to check on a cut on Saint-Denis, but the doc let them continue, and the French fighter was back in control on the ground. He took the back, got a body lock in place, and sunk in a rear-naked choke — but Stolze was saved by the bell.

Early in the second, Saint-Denis went back after the takedown, but Stolze defended with a very tight standing guillotine. Saint-Denis gutted it out, and once free, was able to convert the takedown. From there, he transitioned to the back, methodically working his way around and sinking in a rear-naked choke. A moment later, Stolze tapped!