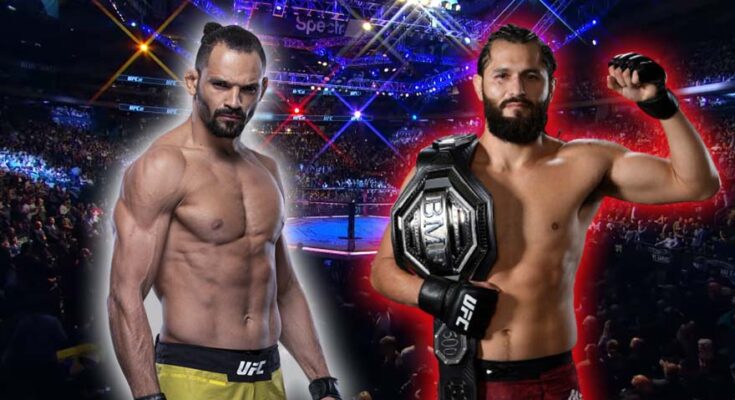 Michel Pereira wants Jorge Masvidal next, but it’s not just about getting a high-profile matchup.

Michel Pereira is not done taunting Jorge Masvidal just yet.

After provoking the BMF champion at UFC Vegas 55’s post-fight scrum following his split decision win over Santiago Ponzinibbio, the Brazilian doubled down on the trash talk on Monday.

The rising UFC welterweight contender Michel Pereira called out the BMF champion as well as Nate Diaz following his most recent win inside the octagon. Pereira (28-11 MMA, 6-2 UFC) defeated seasoned veteran Santiago Ponzinibbio in a split decision in the co-main event of Saturday’s UFC Fight Night 206. It was his fifth consecutive win inside the UFC, and a Fight of the Night bonus-worthy victory at that.

The Brazilian took aim at two of the biggest stars in the UFC immediately after his win.

“I really want to fight Nate Diaz because I think it’d be really fun to slap each other around,” Pereira told reporters at the UFC Fight Night 206 post-fight press conference. “I think it’d be a really fun fight. I think we’d put on a show for all the fans.

“And also, Jorge Masvidal because I have a little bit of a problem with him, and I want to settle it.”

Michel Pereira’s callout of Masvidal is more personal than the Diaz one. “Demolidor” claims Masvidal slid into his wife’s direct messages on Instagram and that hasn’t sat well with him.

“So he sent an emoji to my wife – the emoji with the two hands together like (praying),” Pereira explained. “He sent it to my wife and didn’t send it to me. And you know, I never actually crossed paths with him, never had the chance to ask him. So I figured, you know, I really want to understand, but might as well understand inside the octagon. So we’ll just settle it over there.”

In an interview with MMA YouTube channel Olhar da Luta, Pereira mocked Masvidal’s recent track record and losing skid, saying ‘Gamebred’ just focus on winning rather than talking. Furthermore, Michel claimed that Jorge is not interested in the fight because the Brazilian is not a big enough draw to warrant a big payment from the UFC.

“I saw a video of him today, saying he wants to fight Conor McGregor,” Pereira said. “All that guy does is lose and he wants to face top guys. I don’t get it. I’ll get him, though. Don’t worry, I’ll get him soon. I have the longest win streak in the division after Kamaru Usman.

“I want to see what his excuse is going to be. Those guys always have an excuse. Masvidal is the king of excuses. He’s on a three-fight skid and doesn’t want to fight me? What is he, scared? Or maybe it’s about money. All those guys think about is money.”

Currently on a five-fight win streak, Pereira (28-11-2 NC) defeated the aforementioned Ponzinibbio, Andre Fialho, Khaos Williams, Niko Price and Zelim Imadaev in his most recent outings. In fact, the 28-year-old’s most recent defeat dates back to a disqualification loss due to illegal knee, against Diego Sanchez, back in July 2020.