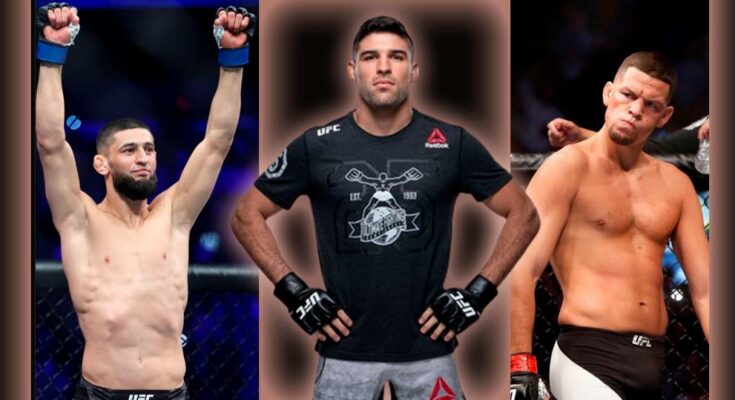 Nate Diaz and Khamzat Chimaev are all set to lock horns in the main event of UFC 279 scheduled for September 10 at the T-Mobile Arena in Las Vegas.

This will be the Stockton native’s final fight of his UFC contract, where he will be looking to revive himself after a winless period of three years.

The Brazilian recalled Chimaev’s performance against Gilbert Burns at UFC 273 and mentioned how ‘Borz’ managed to outperform an ace fighter like Gilbert Burns.

Terming Khamzat Chimaev as his “favorite” while giving his pick for the main event of UFC 279, Vicente Luque said:

“I’m always gonna expect Diaz to put on a tough fight, you know. He’s very durable, he has great conditioning, he still has his tricky, you know, tools. But I would never put him as favorite for this fight. I mean not, not realistically. Right now with how the division is moving, with what Chimaev has showed.”

Praising ‘Borz’ for his performance against Burns, Luque added:

“I mean… watching the fight against Gilbert, you know… I know who Gilbert is, I know how tough he is and Chimaev went in there and survived and you know, at the end of the day he got a win… that shows a lot… I gotta put Chimaev as a favorite.”

Check out Vicente Luque’s full interview with Mike Owens of LowKickMMA below: