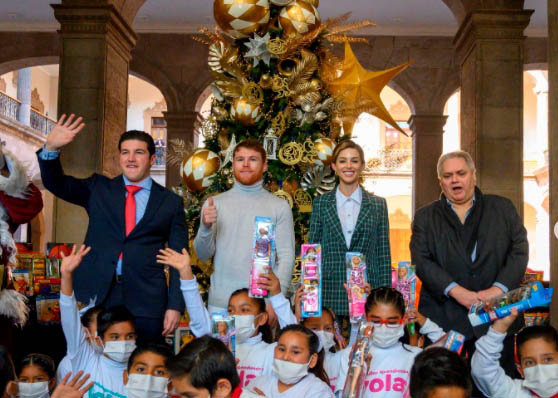 It seems like Canelo Alvarez has outdone himself when it comes to philanthropy, playing Santa Claus to children as Christmas rolls around. Canelo recently donated a massive tally of 5,500 toys to children in Nuevo Leon.

“The Undisputed Champ [Canelo] pulling up in a semi to donate 5,500 toys for the kids in Nuevo Leon, Mexico!”

In the wake of his donation, Canelo Alvarez was hailed by an extremely popular Mexican wellness influencer for his generosity. Marina Rodriguez Cantu shared a series of images with Canelo Alvarez, the toys that he donated and the children who received the toys across her social media pages.

“THANK YOU @canelo  for the donation of 5,500 toys for the children of Nuevo León!” wrote Marina Rodriguez Cantu in a post on Instagram.

“THANK YOU @lego  for the 350 gifts you donated to us today !!!! Eternally grateful to you !!!” wrote Rodriguez in another post on Instagram.

After Canelo’s trainer Eddy Reynoso paved the way for a cruiserweight title fight against Ilunga Makabu, it seems like the fight may not materialize after all.

Canelo Alvarez was expected to lock horns with the Congolese fighter on the occasion of Cinco de Mayo. However, it seems like the WBC played spoilsport and has different plans for the two fighters. Makabu is currently hurtling towards a clash against his mandatory Thabiso Mchunu.

WBC president Mauricio Sulaiman subsequently revealed that the winner of the fight between Makabu and Mchunu will be offered the opportunity to go toe-to-toe against Canelo Alvarez somewhere down the line.

“The winner of Makabu vs. Mchunu will go against Canelo. It is important to make Makabu and Mchunu known to the international boxing community at these levels. They are known in Africa and Russia, but we have to see them on a card and thus heat up a fight (with Canelo),” Mauricio Sulaiman told Boxing Scene.