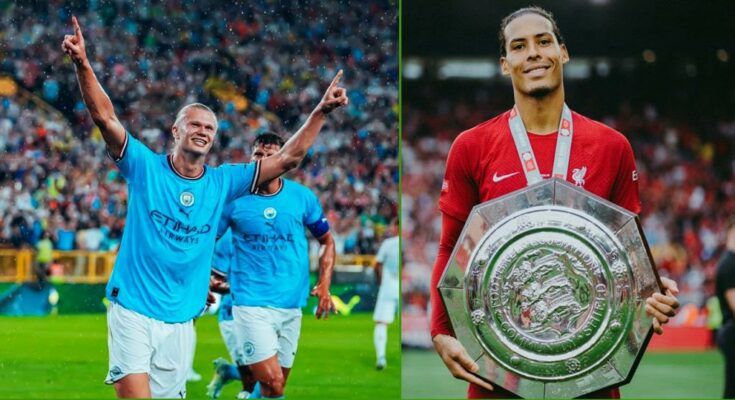 Haaland endured a disappointing debut in the Community Shield as City fell to a 3-1 defeat against Jurgen Klopp’s side, with his misery complete after a horrific miss inside the six-yard box during injury time.

However, Virgil van Dijk believes that Manchester City fans should not worry about their new signing, as the 22-year-old will make defenders’ lives in England ‘horrible’. The Liverpool star told reporters (as quoted by The Manchester Evening News):

“Focus is always the same for any striker, he has a lot of qualities to make life difficult for defenders. He will make defenders’ lives in England horrible, he’s so direct, he has everything, he can head the ball, he’s quick. Today we kept him at bay, he had one chance, two maybe. Other than that we did well

“I’m not going to give him too much advice but he will know he has to focus on his own game and not look at what others say. There’s pressure on people who come in for big price tags. What can you do about it?

“You come in to perform and a club pays a transfer fee. You can’t do anything about it. You put your head down, work and in his case try and score as many goals for City as possible. Same for Darwin in our case, hopefully in our case he can score more.”

While Haaland struggled on his debut, Uruguayan forward Nunez enjoyed far more success as he opened his Liverpool account in injury time to secure his side their first Community Shield since 2006. Nunez was also involved in the penalty incident which led to Liverpool retaking the lead late on, after his header was handled by Ruben Dias.

The 23-year-old became the Merseyside club’s record signing in the summer following an incredibly successful season at Benfica and Virgil van Dijk claims he has already seen enough to impress him. The world-class defender told reporters: