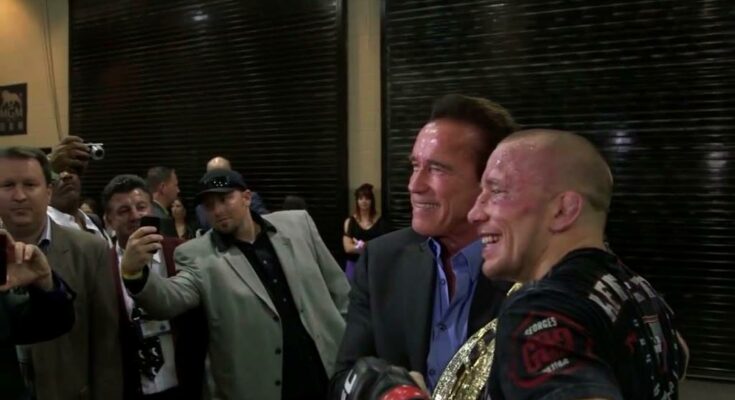 Around the world, aspiring MMA athletes look forward to Georges St-Pierre as an example.

But who served as a motivation for the Canadian MMA legend to don the gloves? When he ran across Austrian-American celebrity Arnold Schwarzenegger after one of his UFC fights, “GSP” himself informed the fight fans of it.

At UFC 167, the MMA great just barely defeated Johny Hendricks. The champion received possibly the most damage in a battle following the Matt Serra upset, making the contest tough for both competitors. Nevertheless, “GSP” retained his title and won a split decision.

He had a fan moment when he spotted Arnold Schwarzenegger backstage before heading to get stitches for all the damage he had sustained throughout the fight. The greatest MMA fighter who has ever lived raced over to his idol and kneeled, screaming, “NO, no, no, my idol. Oh my God!”

The welterweight champion initially said he needed to consult a doctor. Consequently, the Terminator actor remarked, “Take care of yourself, okay? Thank you for the great entertainment.” But after speaking with Schwarzenegger, “Rush” was forced to take a minute to reflect on his “Childhood hero” and “inspiration” from his youth.

St-Pierre made the most of the opportunity by asking for his UFC belt and placing it on the Hollywood star’s shoulder after receiving it. The champion answered, “No, no, no, you are my inspiration, you’re the one,” in contrast to “Arnie”, who wanted GSP to hold the title.

“ENJOYING EVERY MINUTE OF LIFE OUTSIDE THE OCTAGON- HAD A GREAT TIME WATCHING UFC 171 WITH MY IDOL @SCHWARZENEGGER !!!”

The last time “Rush” competed for the UFC was in the welterweight category at UFC 167. The Canadian sports legend had to take a sabbatical from Octagon due to the Hendricks fight and the strength of his overall workload as a champion.

He didn’t stop and continued going to a UFC event. As a result, he was there to see what happened at the American Airlines Center in Dallas, Texas, on March 15, 2014. In addition, he was with his hero from boyhood.