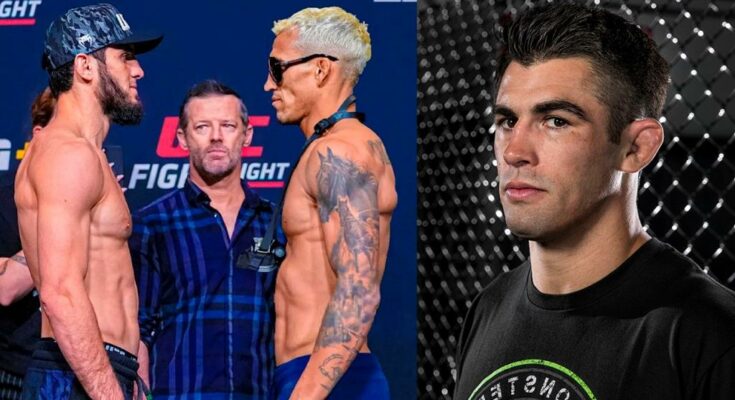 Charles Oliveira and Islam Makhachev have been paired up to clash for the vacant lightweight title next at UFC 280 in Abu Dhabi on October 22.

Expert analyst Dominick Cruz has his breakdown on who will walk away from Abu Dhabi with the vacant lightweight title.

Cruz wasn’t willing to boil things down to a definitive winner. Instead he laid out the conditions in which Oliveira could win, and those which favored Makhachev. During an Instagram Live video, he said:

“In the early days of [Oliveira’s] career, the way he would lose, you would defend his submissions and keep him on his back and ride the clock and ground and pound. Or land big shots on the feet, then take him down and not get submitted. If you could survive the onslaught of his ground game, then you could ride him out to a decision. So if it goes five rounds, I think Makhachev has the style to stay out of submissions, stay on top, and blanket Oliveira and shut down a lot of his submission game.”

Cruz added that Oliveira has evolved significantly from the ‘Do Bronx’ that struggled early in his UFC career. ‘The Dominator’ credited that to him bulking up in size and committing to his striking game more while on the feet, using his opponents’ fear of his ground game to throw big strikes from ‘reckless’ positions.