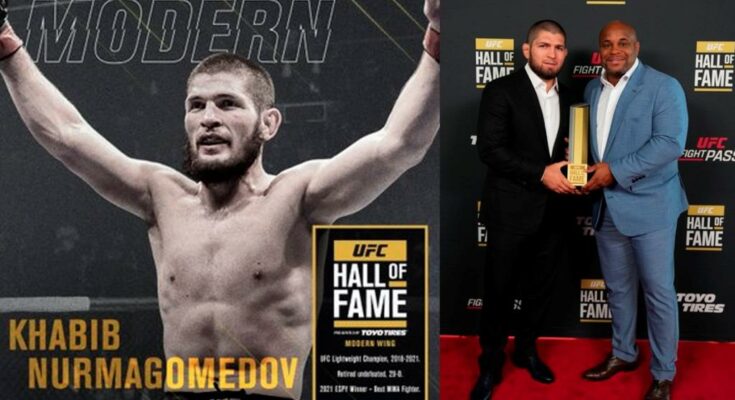 The UFC Hall of Fame induction ceremony is one of the staples of the promotion’s annual “International Fight Week” schedule. This year, the event takes place on June 30 at T-Mobile Arena in Las Vegas.

This year sees three inductions, with no new entries into the pioneer or contributor wings.

That doesn’t mean the ceremony is short on notable inductees, however, as two of the most dominant fighters of the modern era and one incredible fight will all be honored.

The first athlete to the stage, featherweight Cub Swanson, was inducted into the UFC Hall of Fame Fight Wing for his epic bout against Dooho Choi that earned Fight of the Year in 2016. 11 years and 22 fights into his UFC career, Swanson extended his UFC contract after his Performance of the Night bout against Darren Elkins in December 2021, and is looking forward to creating more iconic moments in the Octagon.

“I became a fan with certain fighters and their styles and who laid it all out on the line and who never took the safe route,” Swanson said. “I always respected fighters like that so to make it in on a fight means more to me. It’s like I did it my way, and after 18 years it’s a nice little pat on the back.”

The next fighter to be honored, and first to be inducted into UFC’s 2022 Hall of Fame Modern Wing was former two-division champion and now UFC commentator Daniel Cormier. After earning titles at both light heavyweight and heavyweight, Cormier stamped his legacy as one of the best pound-for-pound fighter’s in the promotions history.

Ever since the official weigh-ins at UFC 210, Cormier has held strong in his conviction that he did not cheat when he recorded his official weight for the second time for his title fight against Anthony Johnson.

On his first attempt, Cormier stepped on the scale at 206.2 pounds, but magically hit the 205-pound limit upon his second try just a few minutes later. The incident became known as “Towelgate.”

Over five years later, Cormier finally revealed what happened that day as a part of a beautiful speech in which he thanked his late parents, his manager Bob Cook, and his teammates like Cain Velasquez, among others for the success in his career.

“Winning any UFC title is so hard,” Cormier said. “To win one is an amazing accomplishment, to be a double champion is crazy.”

Cormier emphasized how lucky he is to be in his position, offering words of advice for up-and-coming fighters who are looking to stamp their own legacy.

“Don’t allow for the bad to cripple you. Allow for it to serve as motivation to do something even bigger and better. Because if you get dealt adversity, if something bad happens and you quit, you’ll never know what you truly can be.”

The last fighter to the stage was the former undefeated lightweight champion Khabib Nurmagomedov. Amassing a perfect 29-0 record, Nurmagomedov defeated top contenders and former champions throughout his career. Before his bout with lightweight contender Justin Gaethje, Nurmagomedov tragically lost his father and life-long coach. Bearing with his loss, Nurmagomedov retired after that victory.

The last fighter to the stage was the former undefeated lightweight champion Khabib Nurmagomedov. Amassing a perfect 29-0 record, Nurmagomedov defeated top contenders and former champions throughout his career. Before his bout with lightweight contender Justin Gaethje, Nurmagomedov tragically lost his father and life-long coach. Bearing with his loss, Nurmagomedov retired after that victory.

Former UFC lightweight champion Khabib Nurmagomedov has had a legendary career in the UFC. The Eagle won UFC gold while staying undefeated. During the Hall Of Fame 2022 event, Nurmagomedov was asked which moment from his career was the best. He picked a moment involving arch-rival Conor McGregor.

During the red carpet of the UFC Hall Of Fame event, Nurmagomedov said, “It was here – this arena – Oct. 6, 2018. Biggest fight in MMA history. I’m very happy I win this fight. I can lose any of my fights. But no way this fight.”

Nurmagomedov fought Conor McGregor on October 6th, 2018 at UFC 229. The fight between the two had immense hype around it and had garnered interest from people around the world.

“I feel like I did a lot of things for this sport and I’m very happy for this,” Nurmagomedov said.

“I can’t imagine he can make his father any prouder and I’m sure that was his number one goal,” Gaethje said. “He has nothing left to prove … we all dream to do what he did: be perfect and get out while we still got it.”