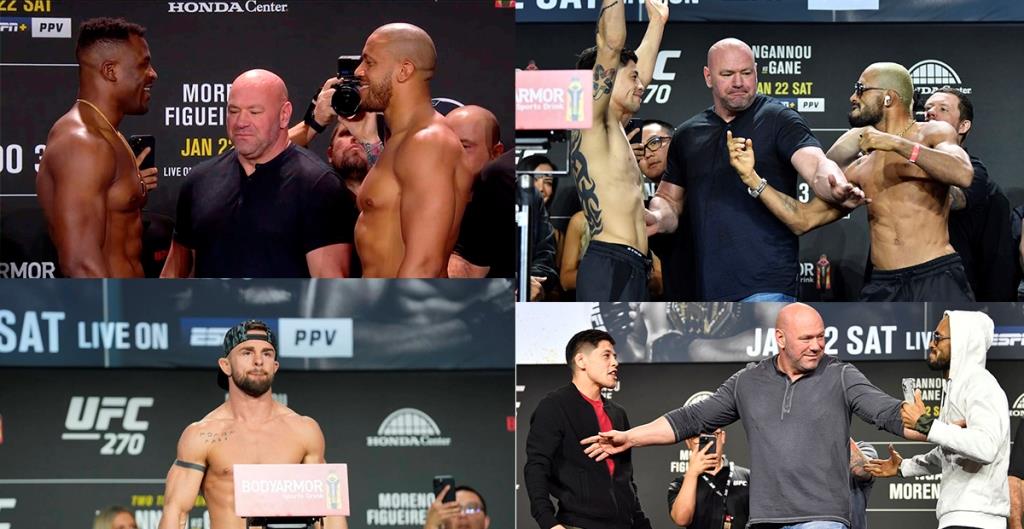 In this article the main card fighters competing at UFC 270

UFC 270 will take place at the Honda Center in Anaheim, California on January 22, 2022. The pay-per-view event will be headlined by a heavyweight title unification bout between UFC heavyweight champion Francis Ngannou and interim champion Ciryl Gane.

The UFC 270 main card starts at 10 PM ET/ 7 PM PT, and fans are looking forward to a long night of intense action. See the full main card below.

Francis Ngannou (16-3) claimed the heavyweight title last March with an impressive KO win over Stipe Miocic. ‘The Predator’ has been idle since winning the belt while negotiating his next fight with the promotion. Ngannou is on a five-fight winning streak in the UFC, with his last loss coming against Derrick Lewis in July 2018. The upcoming fight will be a huge test for Ngannou, who is defending the heavyweight title for the first time since winning it.

Ciryl Gane (10-0) became the interim champion with a dominant win over Derrick Lewis at UFC 265. ‘Bon Gamin’ has the opportunity to unify the belts and become the undisputed champion of the heavyweight division by dethroning Francis Ngannou at UFC 270.

Reigning flyweight champion Brandon Moreno (19-5) put on one of the most impressive performances of his career at UFC 263. ‘The Assassin baby’ defeated Deiveson Figueiredo via rear-naked choke in round two to claim the UFC flyweight title. The fight was a rematch of their December 2020 clash that ended in a draw, with Figueiredo retaining the title.

Deiveson Figueiredo (20-2) seems highly determined to even the score with ‘The Assassin Baby’. The 34-year-old will look to recapture flyweight gold with a vintage performance at the upcoming pay-per-view event.

Michel Pereira (26-11) gained popularity as a wild and exciting fighter when he started out in the UFC. ‘The Demolidor’ is currently on a three-fight winning streak and hopes to make a big statement when he takes on UFC debutant Andre Fialho

Andre Fialho (14-3), who is riding a four-fight winning streak, is set to make his UFC debut against Pereira. Fialho is serving as a replacement fighter for Muslim Salikhov.

Cody Stamann (19-4), who began his UFC career with three straight wins, is looking to rebound from his last two losses in the cage. Eight of Stamann’s last 10 bouts have gone to a decision.

Said Nurmagomedov (14-2) is one of the rising prospects in the UFC. He suffered his only UFC loss against Raoni Barcelos in December 2019. Nurmagomedov rebounded from the loss with an impressive KO win over Mark Striegl in October 2020 to get back in the win column.

Trevin Giles (14-3) will look to bounce back after suffering the first KO loss of his MMA career against Dricus Du Plessis in July 2021. ‘The Problem’, who has a record of 5-3 in the UFC, will take on young phenom and UFC debutant Michael Morales.

Michael Morales, who is set to make his UFC debut against Giles, earned his contract with the promotion after an impressive performance at Dana White’s Tuesday Night Contender Series. The young talent is just 21-year-old and already holds a solid 12-0 MMA record.