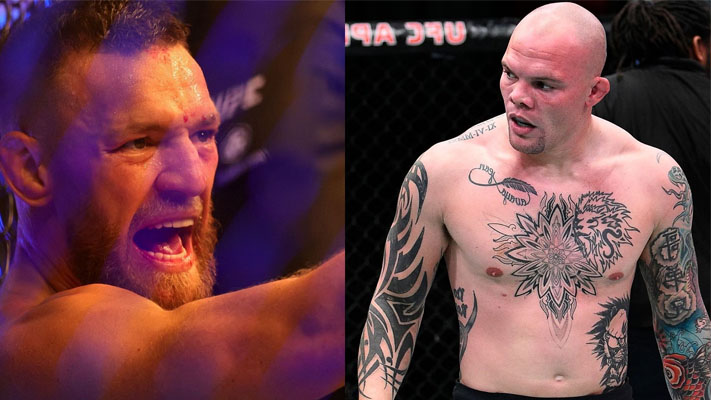 Conor McGregor has launched a scathing attack on Anthony Smith.

‘Lionheart’ questioned why McGregor would remove himself from the USADA testing pool if he wasn’t taking any form of steroids. According to Smith, the timeframe that ‘Notorious’ needed to recover from his severe leg break last year is also suspicious.

The UFC star has responded to Anthony Smith’s claims, calling him (and many others) a “rat” who doubts him as a clean fighter:

“This rat spoke to weidman who’d the same horrific injury and is having severe complications still, is bothered that I was able to heal/return to a normal way of life. He, like many other rats in my game, would be happier if I wasn’t able to play with my children the same again.”

Conor McGregor continued his tirade on ‘Lionheart’ by stating that he’s the most tested fighter in combat sports:

“The audacity of this loser! @lionheartsmith you’re a loser. The % of the bones joining back after a break like this is so low. You think I give a f**k about anything else. I am the most tested fighter of all time in combat. I give everything to this game. You – Nothing!”

The Irishman then took aim at Smith’s own injury issues as the American suffered a broken ankle in his fight with Magomed Ankalaev at UFC 277.

‘Notorious’ has come under fire in recent weeks after sharing multiple photos and videos of himself looking almost unrecognizable. The Irishman is walking around well over 170lbs but many are concerned it may be because of steroids as he isn’t currently in the USADA testing pool.

In a video uploaded to his YouTube channel, the fitness expert analyzed images of McGregor and compared him to British bodybuilding legend Dorian Yates:

“He [Conor McGregor] is a transformed human, seemingly unrecognizable. He literally looks like Dorian Yates reincarnate from years ago… Some of these photos he’s been dropping of his absurd physique… Some of them look suspiciously photoshopped to me, that’s how cranked this guy looks right now. Relative to what I believe he’s naturally capable of.”

“Either he is almost certainly taking something right now, he’s not being tested by USADA so there’s absolutely the most incentive ever for him as he’s creeping into his mid-thirties, has to make a dramatic comeback. This is his last shot and coming off a brutal injury, where you’ll be taking certain things to expedite your recovery.”