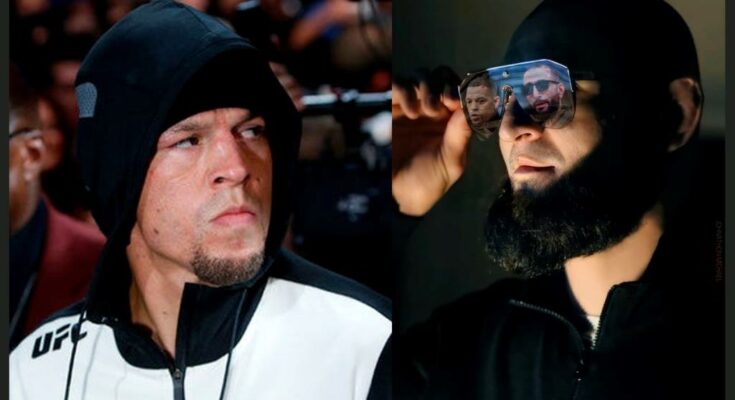 Nate Diaz and Khamzat Chimaev have traded barbs in the recent past regarding a much-discussed potential fight.

Recently, Khamzat Chimaev has put Nate Diaz on blast for the Stockton native’s recent comments on ‘Borz’ and Conor McGregor. The Russian-born Swede took to Twitter to seemingly challenge Diaz to fight him.

Although the 37-year-old didn’t respond to Chimaev initially, he’s now taken to social media to aim a jibe at the undefeated fighter along with former opponent Conor McGregor. Nate Diaz claimed that both McGregor and Chimaev are currently injured and cannot fight anytime soon, so it doesn’t make sense for them to call him out right now:

Chimaev issued a scathing response to Diaz’s tweet, claiming that the Stockton native has refused to fight him “10 times” already:

According to White, Diaz refused to take the fight after initially accepting it. Additionally, the UFC boss stated that the matchup hasn’t come to fruition yet due to a multiplicity of reasons. The 52-year-old recently said on The Jim Rome Show:

“To be honest with you right here, off the top of my head, this thing has played out back-and-forth so many different ways. Yes, we tried to make that fight. He wanted the fight then he didn’t want the fight. But Nate Diaz did accept the fight with him [Chimaev].”

The idea of a potential outing between Diaz and Chimaev initially crept up due to a matchmaking board leak. Chimaev immediately issued a callout to the Stockton native and subsequently accused the veteran of ducking him.

Diaz later stated that he was unable to secure the booking despite his best efforts. Chimaev claimed that the Stockton native only accepted the fight after ‘Borz’ had moved up in weight. However, he is still eager to fight Diaz even if it comes at the cost of a severe weight cut. In his most recent interview, Dana White also stated that a potential outing between Diaz and Chimaev isn’t completely off the books yet.

Watch White’s appearance on The Jim Rome Show below: