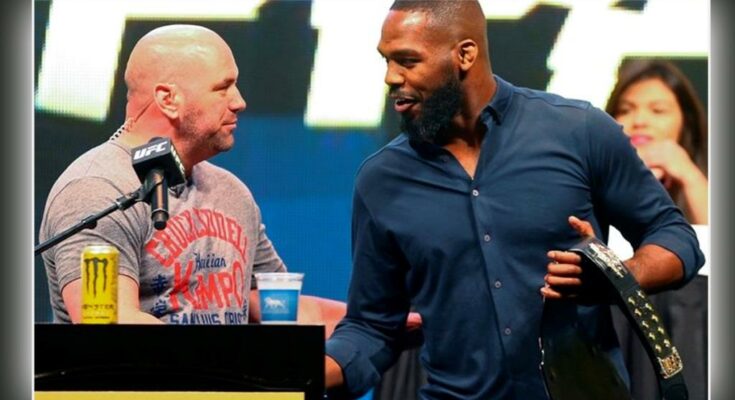 Shortly after Jones defeated Dominick Reyes at UFC 247 to defend his light heavyweight championship in February of 2020, he made the decision to vacate his title. The plan was to move up to heavyweight but the pandemic and other issues have delayed that. However, now it appears ‘Bones’ is ready to go.

When Jones does make his next walk to the Octagon, standing across from him will be either Francis Ngannou (for the undisputed title) or Stipe Miocic (likely for the interim belt), White revealed.

“Jon Jones is ready to go,” White said on The Jim Rome Show on Monday. “We’re just waiting for an opponent. It’s either going to be Francis [Ngannou] depending on how long his knee is going to take to recover or Stipe Miocic.”

There’s no question a fight between Jones and either Ngannou or Miocic would be massive. Many fans have wanted to see ‘Bones’ at heavyweight for years now and if he can beat either of those men, it would be a legacy-defining win and could potentially cement his status as the GOAT of MMA.

Although Jon Jones is ready to go, it still is unknown the exact time frame as to when he will return. If he’s going to fight Ngannou it will depend on when the heavyweight champ’s knee is healed but he did come out and say he will be ready by the end of this year. As for Miocic, it’s still uncertain when he will be ready to return.

Back in January, Francis Ngannou surprised a lot of fans by using his newly-found wrestling skills to defeat Ciryl Gane and unify the UFC heavyweight championship. However, it didn’t take long for Ngannou to reveal that he’d been dealing with a knee injury that was likely going to lead to surgery.

When Jon Jones does return, White is excited to see how he will fare at heavyweight.

“It’s very interesting because I’m a huge believer in ring rust,” White said. “But for all the negative things you could say about Jon Jones and his personal life and things that have happened, he’s the best. He’s definitely the best of all time.”