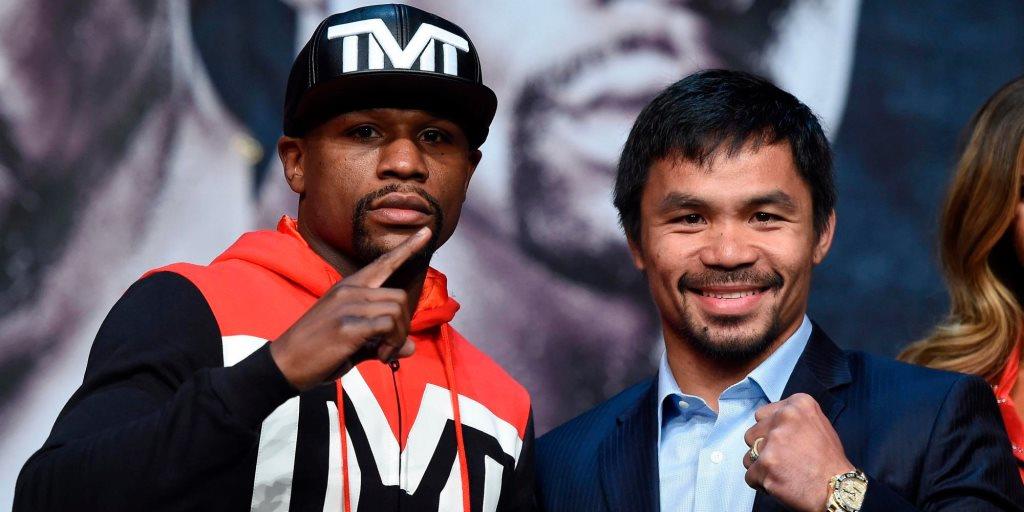 Floyd Mayweather yesterday promoted the fight it this Sunday’s exhibition bout with Logan Paul, the 50-0 all-time great, once again finding himself in the middle of a media scrum. It’s hard to tell if Floyd was annoyed about it, but the 44-year-old was repeatedly asked for his thoughts on another fight, a real fight – the one his former rival Manny Pacquiao will have against Errol Spence in August.

Enough has been written about how the two best fighters of their era are going about things in two totally different ways as they continue when in their 40’s – Floyd taking “easy money” from curiosity bouts such as Sunday’s offering, Manny laying it all on the line once again, this by challenging one of the best young, in his prime fighters out there – but Floyd did give his thoughts on the August 21st fight.

“I wish both guys nothing but the best, but Errol Spence, I wanna see him win,” Mayweather said as captured by Fight Hype. “I’m pushing for Errol Spence to win. Absolutely, that’s my people – I’m gonna always push for my people first. Just like the Philippines are gonna stand by their man, Pacquiao. I’m an American, and I’m going to stand by my people first.”

Mayweather also said how he plans to call Spence to “give him some pointers.” Mayweather sparred Spence ahead of his own 2015 “Fight of the Century” fight with Pacquiao, and he knows Spence well. It’s no real surprise that Mayweather is rooting for Spence to win, yet many, many millions of people around the world are hoping Manny can pull it off in August, and they are not all Filipinos.

Would Mayweather be a little jealous of Pacquiao if he managed to beat Spence? Maybe. There is no question, Pacquiao is closing out his career in quite incredible fashion – with his last three fights being against young, talented, and dangerous fighters in Adrien Broner, Keith Thurman, and Spence.

That he does, and we fans love him for it. It will be crazy if Pacquiao can defeat Spence. If he’s a genuine hero all across the world already, imagine how celebrated Pac-Man will be if he beats Spence, retires, and then heads off towards the presidency of his country!