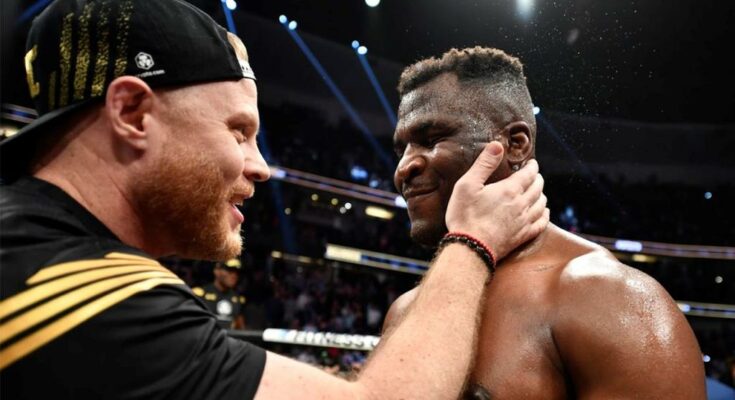 Ngannoun managed to come out on top despite a serious knee injury suffered prior to the fight, which required surgery to repair a torn MCL and damaged ACL in March.

Four months later, it appears everything is going to plan as Ngannou continues to rehabilitate his knee.

“I think he’s either ahead of schedule or on track, one or the other,” Nicksick told MMA Junkie Radio. “And from what I’ve gathered (from UFC Performance Institute staff), he’s making great strides. He’s back in the gym moving around, hitting pads and stuff.”

What happens when Ngannou ultimately is 100 percent, that’s anyone’s guess as things begin to sort themselves out atop the UFC heavyweight division.

Barring any setbacks, Ngannou is in line for an end-of-year comeback or fight in early 2023 – but then again, there’s the matter of the contract dispute between Ngannou and the UFC that needs to be settled.

For Nicksick, none of that stuff is his primary concern. He simply can’t wait to work with Ngannou at full speed again.

“That’s the biggest thing for me as a coach,” Nicksick said.

“What I miss out on is time of growing, areas that we can improve on. That’s where I get like, ‘Oh man, we’re not doing enough X, Y, Z.’ And I’m OK with that. We don’t have a fight lined up or anything right now. His main focus is getting his knee rehabbed to the point where we can get back in the lab and start doing these things again. Hopefully, and it sounds like for what he’s saying that if something were to happen, it would be the end of the year or early 2023.”