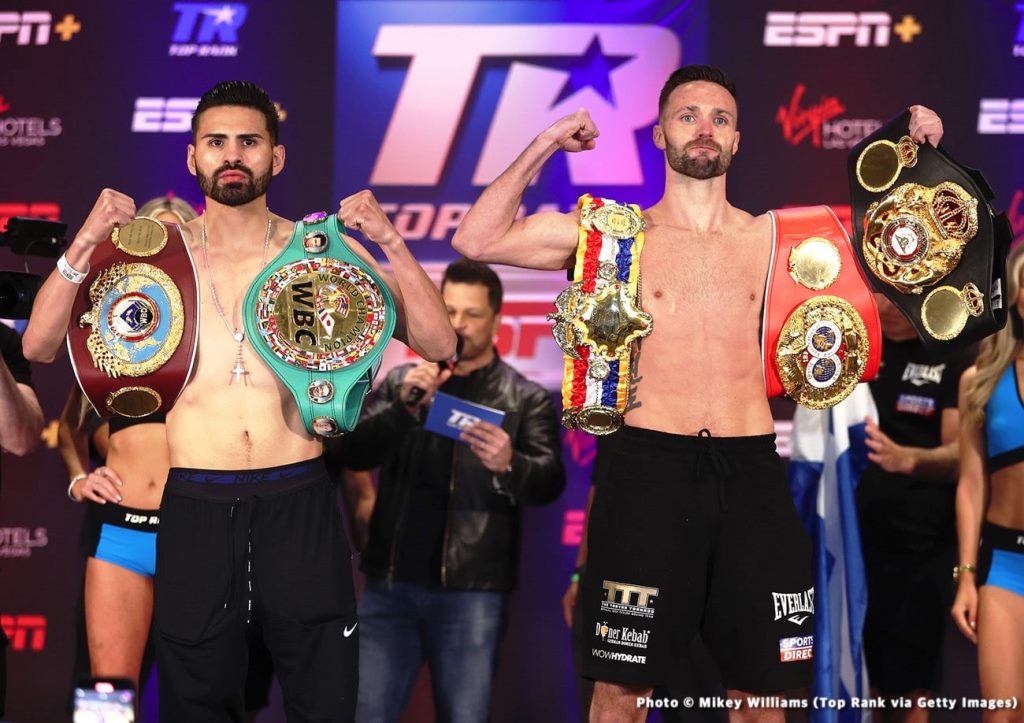 Josh Taylor and Jose Ramirez both weighed in at 139.6 lbs on Friday at their weigh-in for Saturday’s huge undisputed light-welterweight showdown on ESPN at the Virgin Hotels Las Vegas, in Las Vegas, Nevada.

WBC/WBO light welterweight champion Ramirez (26-0, 17 KOs) looked like he was ready to start slugging with IBF/WBA champ Taylor (17-0, 13 KOs) on the spot during the face-off. Ramirez had the look of a guy that was off the leash, ready to thrash the Scottish fighter Taylor for all the trash-talking he’s been doing lately.

Taylor is convinced that Ramirez won’t be able to deal with his boxing ability in this fight, but we’re going to have to see. Ramirez is a fair boxer himself, and it could be interesting if the fight takes place on the outside.

I can’t see that happening. Taylor is too temperamental for him not to want to brawl with Ramirez.

The winner of this fight will hold all four titles at 140, and it could be the last time they fight in the division. In Ramirez’s case, he already said that he plans on going up to 147 if he’s successful in unifying the 140-lb division against Taylor.

That’s a misconception on the part of the boxing fans, who have assumed that Ramirez would fight Crawford because they’re both with Top Rank. But according to Ramirez, he’ll decide who he wants to fight.

You can argue there’s more money for Ramirez if he faces Errol Spence Jr because he’s a proven pay-per-view attraction.