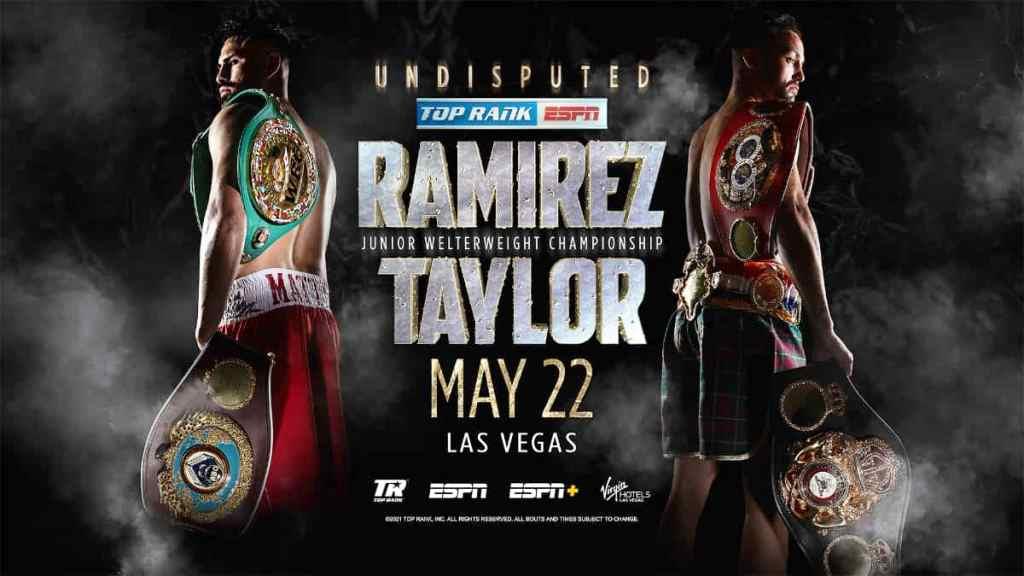 Jose Ramirez looked very uncomfortable on Thursday during his face-off with Josh Taylor during their final press conference for their undisputed light welterweight championship this Saturday night on ESPN at the Virgin Hotels in Las Vegas, NV.

The two champions will be meeting in the headliner. Unfortunately, the winner of the Taylor vs. Ramirez clash is expected to take on Jake Catterall next rather than Teofimo Lopez, Gervonta ‘Tank’ Davis, or Regis Prograis.

You can say that it would have helped the Ramirez-Taylor promotion if the boxing public knew the winner would face one of those talented fighters next rather than Catterall, a fighter with arguably an inflated 26-0 record with largely wins over British domestic opposition rather than world-class fighters.

Taylor, 30, won the coin toss for him to come out second for the fight on Saturday. In Taylor’s mind, it’s only fitting because he believed that the event should have been promoted with his name first in the billing, Taylor-Ramirez,’ rather than Ramirez-Taylor.

“He looked a little bit nervous, and part of me thinks he looks like he’s struggling at the weight,” said Josh Taylor to Boxing Social on his face-off with Ramirez on Thursday.

“It was meant to be,” said Taylor about him winning the coin toss to come out second. “It should have been Taylor-Ramirez. I’ve got the WBA, IBF, and Ring Magazine. Therefore, it should be Taylor-Ramirez, but listen, it’s all good. I’m glad that I get to walk second, not that it really matters. It’s just a personal choice.

“It’s disappointing. This is a massive fight for British and Scottish history in boxing,” Taylor said. “If I pull off this win, it’s the biggest win in recent British history. It’s frustrating that nobody seems that interested.

The problem with this fight is that the U.S boxing public isn’t familiar with Josh Taylor, as he hasn’t been fighting in the United States. Also, Taylor’s win over former WBA light welterweight champion Regis Prograis in the World Boxing Super Series in 2019 was too close. There should have been a rematch, but Prograis was never given a second shot.

“It doesn’t really bother me, I’m in the zone, in the bubble here,” Josh Taylor said when asked if the Deontay Wilder arbitration case results have hurt the interest from boxing fans in his fight with Ramirez on Saturday. “I’m not really bothered about what else is happening, to be honest,” said Taylor.

It looks like the question asked of Taylor about whether the arbitration results for the Wilder – Tyson Fury case went over his head. The reality is, that interest, in that case, has clearly sapped a lot of the focus that otherwise would have been there for the Ramirez vs. Taylor fight by the fans. Without that happening this week, many boxing fans would have focused on the Ramirez-Taylor fight.