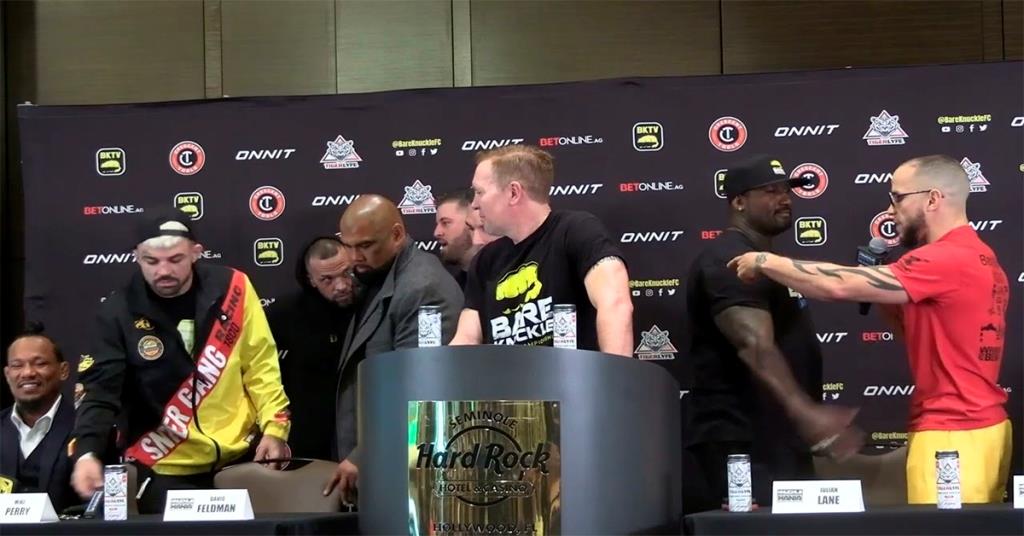 Mike Perry was on typically provocative form ahead of his Bare Knuckle Fighting Championship debut.

MMA badboy Mike Perry demonstrated he has lost none of the eccentricity he showed during his UFC career as he fired up an acrimonious Bare Knuckle Fighting Championship (BKFC) press conference – brandishing a bat towards former Ultimate Fighter (TUF) contender Justin Lane ahead of their fight in Florida on Saturday.

Tough-talking Perry entered a war of words with Lane over their ringside scrap that was caught on camera at a BKFC event in Miami in December, with a clearly irritated ‘Platinum’ calling his rival a “little b*tch” and putting his microphone on the table during their heated exchange over the infamous incident.

The former Fight of the Night winner then stood up and pulled a bat out to shrieks of amazement from the room, leading to security personnel stepping in to ensure neither man could reach the other.

Lane accused Perry of using a well-known racist term towards him and told his antagonist that his “people” were “already waiting outside to beat your ass.”

“But I’m going to make [you] wait so I can get you in the ring and let you get really f*cked up,” added the fighter known as ‘let me bang’ from his catchphrase during his time on TUF.

“With that bat, you might want to watch yourself walking out of here if you want to play like that.”

Perry cut a frequently troubled figure on his way to losing four of his five final bouts with the UFC, ending his time with the promotion following his defeat to Daniel Rodriguez in Las Vegas in April 2021.

The 30-year-old also knocked a man out in a street fight in 2016 and was charged with assault after flooring an elderly man with a punch in a dispute in a restaurant in 2020 that was caught on camera and spread on social media.

Latory Gonzalez, who has acted as Perry’s cornerman in fights and had a daughter with him in January 2021, appeared to have had a calming effect on the brawler.

Lane is said to have incensed Perry by mentioning his family in the build-up to their fight, which is Perry’s first for BKFC. Gonzalez described Lane as “garbage” for “bringing family into this”.

BKFC boss David Feldman, sitting next to Perry, said he “can’t wait to watch this sh*t go down” when the pair clash in the notoriously brutal sport. The middleweight fight is the headline event of Knucklemania II.