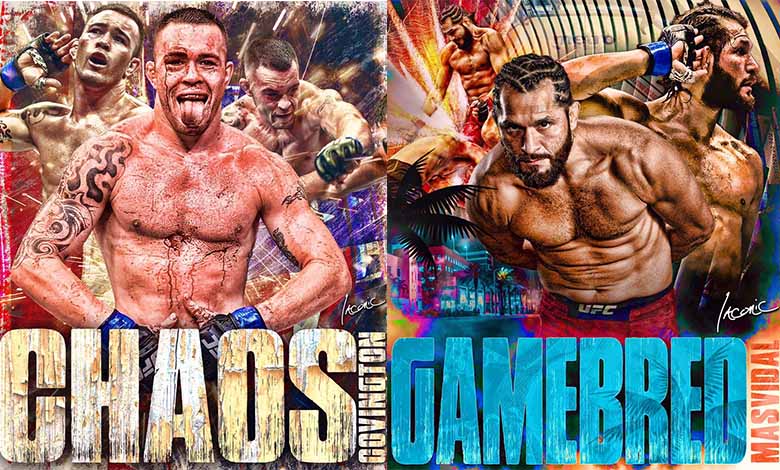 Jorge Masvidal and the Nevada Athletic Commission on Wednesday agreed to delay a hearing that would allow licensure for the UFC star’s Gambred Promotions to hold events in the state.

That decision was made as uncertainty surrounds an incident on Monday in which police suspect Masvidal of committing felony battery after he allegedly attacked Colby Covington outside Miami restaurant Papi Steak.

Jorge Masvidal was present virtually for the commission’s monthly meeting, where he gave his first public comments since a police report stated an unnamed “victim” claimed Masvidal punched him twice in the face, resulting in a fractured tooth and wrist injury. While Covington was not named, a bystander’s video shows Masvidal being restrained from him and later Covington speaking with police.

“Since I do have an open case, I’m not supposed to talk about it but I guess you’re referencing it,” Masvidal said. “Yeah, if we could table it, it’d be better. Right now, I had a mutual combatance with another athlete. I can’t say too much on this, is what they told me to say. If we could table it for later, that’d be amazing, as well.”

A commission official asked Jorge Masvidal, “Were you arrested on Monday night?”

To which he replied, “No, sir. I have not been arrested, bench warrant, nothing has been sent.”

In a follow-up, the official asked, “Have you been charged?”

“To my knowledge, no, sir,” Masvidal responded. “I have not been charged.”

Masvidal’s promotion, Gamebred FC, has held multiple events in his home state of Florida. Weeks ago, Masvidal had applied to go before the Nevada commission for approval. However, Monday’s alleged altercation made commissioners hesitate to suggest the hearing go through as planned.

“If you’ve looked at what was reported in the news over the last couple of days, I would’ve assumed this request would’ve been requested to be removed from our agenda,” NAC chairman Stephen Cloobek said. “But to this point and time it is not. Commissioner (Anthony) Marnell, you reviewed this application. But I believe this application is no longer valid because it is no longer an accurate representation of the promoter’s true and active facts of their business and personal life. With that, we can perhaps table this item until the item can be resubmitted to us.”

Jorge Masvidal respectfully concluded the hearing should be tabled until a future date and thanked the commission for the opportunity to be considered.

“I’d like to say first it’d be an honor to get my license in Nevada. I’ve been fighting in Las Vegas now over 10 years,” Jorge Masvidal said. “Everybody knows it’s the fight capital of the world. It’s the most organized commission in the world. I’ve fought all over the world literally. There’s nothing better than Las Vegas for fighters and promoters. It’d be a dream come true if I can get that license in Las Vegas, sir.”