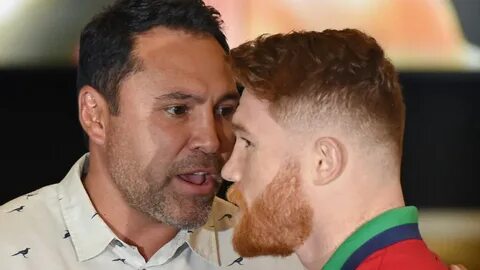 Additionally, Oscar included a demo to teach the superstar how to throw punches correctly.

It isn’t easy to take De La Hoya seriously, given his advanced age and the paunch. For an older out of shape guy, De La Hoya looks impressive hitting the mitts. You can tell that he still has boxing skills, but he looks old and has a dad’s body.

If Canelo accepts the challenge to fight De La Hoya, he’s never going to hear the end of it. Yeah, Canelo will make a huge amount of money, but he’s going to be laughed at by fans, who will put him in the same class as Floyd Mayweather Jr.

“Fk you, talking all that sh,” said De La Hoya on social media in reacting to Canelo. “I’ll fking knock your a out. I’m coming for your a** hahaha.

“And that’s how you throw punches,” said De La Hoya in showing Canelo how to throw shots. “Balanced power and speed.

This was part of the ongoing trash-talking between the 47-year-old De La Hoya and his former Golden Boy Promotions flagship fighter Canelo (56-1-2, 38 KOs).

Interestingly, De La Hoya suddenly calls Canelo out like he’s an active fighter in his 20s rather than a retired middle-aged guy who hasn’t fought since 2008.

This will shock the world if Canelo fights De La Hoya because it would attract a lot of interest, particularly on YouTube.

Canelo is already taking heat from boxing fans for his decision to unify the 168-lb division against the weak belt-holders Rocky Fielding, Billy Joe Saunders, and Caleb Plant.

There are many competitive fights out there at 160, 168, and 175 for Canelo, but he’s chosen the weaker targets.

Paul is said to have made $20 million, and Mayweather’s take could be as high as $100 million for an easy night’s work.

If De La Hoya can taunt Canelo enough to get a fight against him, he can make a huge amount of money from the fight.

Canelo would be doing De La Hoya a tremendous favor if he chose to give him a fight at this point in his career.

Canelo drew first blood during a recent interview with Graham Bensinger in which he stated that De La Hoya doesn’t do anything with Golden Boy and just worries about drinking.