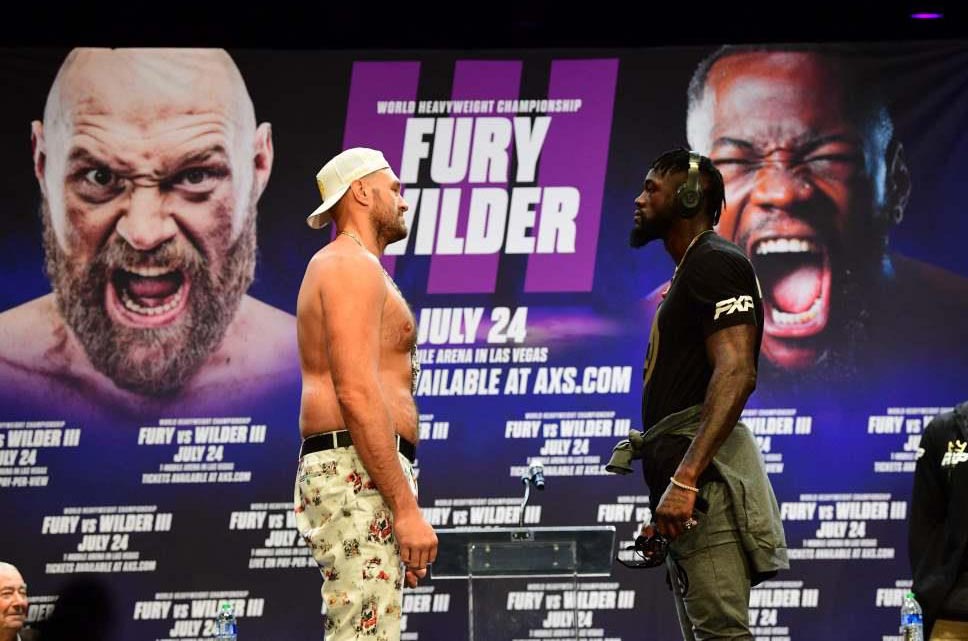 It was the Tyson Fury show at Tuesday’s press conference for his the future trilogy bout with Deontay Wilder.

The two were onstage in Los Angeles to answer questions for their fight on July 24, or at least that was the plan. As it turned out, only Tyson Fury (30-0-1, 21 KOs) was there to talk as Wilder (42-1-1, 41 KOs) deferred all questions to trainer Malik Scott outside of opening statements from both men.

“Look, enough said,” Wilder said in his only comments of the day. “It’s time to cut off his head. And come July 24, there will be bloodshed. Get your tickets now, I’ll see you soon.”

“After all this bloodshed stuff, I’m not so certain,” Fury said. “Heard it all before, to be fair. Said all this last time. Decapitation and bloodshed and all that, but we all know what went down there.”

Fury and Wilder meet for a third time after battling to a dramatic split draw in their first encounter on Dec. 1, 2018, when Fury recovered from what looked to be a surefire knockout blow to make it to the scorecards in a bout that he was otherwise winning, and a seventh-round TKO victory for Fury in their second encounter on Feb. 22, 2020.

To close out the trilogy, Fury plans to put Wilder away even faster than in their previous bout, comparing himself to an 18-wheeler that will flatten Wilder.

“I give me game plan away the first time because he wasn’t good enough to do anything about it and I’ll do the same thing this time because he isn’t good enough to do anything about it,” Fury said. “Deontay Wilder’s a one-trick pony, he’s got one-punch power, we all know that, great. But what I’m going to do to Deontay Wilder this time is I’m gonna run him over as if I’m an 18-wheeler and he’s a human being and I guarantee he does not go past where he did before. Because before I only had five or six weeks of practicing what I was gonna do to him, this time I’ve had 18 months of practicing what I’m gonna do to him so I anticipate it’s gonna be like an 18-wheeler running over somebody and that’s what you’re gonna see.

“I’m building my weight up. I’m trying to get up to 300 pounds for this fight because I’m looking for a big knockout straight away. I don’t believe he’s mentally, physically, or emotionally involved in his fight. I think he’s doing it for the wrong reasons. When people do things for the wrong reasons they always wind up getting hurt. So we’ll see on fight night if I’m a man to my word and if I can run him over quicker than round seven and I think I do, for sure.”

Asked what he thought of Wilder choosing not to answer questions, Fury saw it as a sign of weakness. He also offered to answer any questions directed to Wilder in his place, but nothing came of it.

“It shows how weak of a mental person he is and how much the beating from the last fight has took an emotional, physical effect on his life,” Fury said. “I was worried about Deontay Wilder for quite a while after the defeat that I gave him and obviously he’s doing his little thing with his earphones on and doesn’t want to answer any questions, that’s up to him.”

With Scott answering questions for Wilder, he inevitably got into a brief verbal exchange with Fury in which Scott said that his previous work with Fury will have nothing to do with how Wilder performs on July 24. Scott brought up a previous sparring session with Fury in which Fury busted his eardrum.

While Fury was respectful of Scott, he warned that Wilder will not be able to implement what Scott has been training him to do when the time comes for the actual fight.

“He can do that, but in the real fight, I’m talking about,” Fury said of Wilder’s training with Scott. “He’s gonna to do what he’s gonna do. He’s gonna revert straight back to type, 100 percent. As soon as I hit him with the first right hand, he’s gonna see red and he’s gonna be like, ‘I’m gonna take his head off.’”

Fury-Wilder 3 is set to take place at T-Mobile Arena in Las Vegas, with Fury’s WBC and The Ring heavyweight titles on the line.