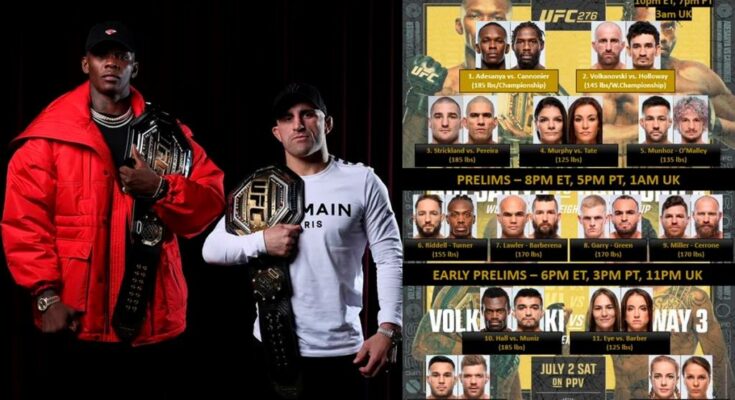 In the main event, Israel Adesanya defends his middleweight championship against top contender Jared Cannonier, while the co-main event will be the third meeting between defending champion Alexander Volkanovski and Max Holloway for the featherweight title.

The main card rounds out with another big middleweight bout between Sean Strickland and Alex Pereira, plus Pedro Munhoz looks to stop the surge of Sean O’Malley in the pay-per-view opener.

Lauren Murphy and Miesha Tate were to scheduled to meet in a pivotal flyweight matchup, but it was later announced on Saturday’s broadcast that the bout would be postponed. A reason for the change was not disclosed, nor was it announced what bout would take its place on the main card.

History will also be made at UFC 276 as the preliminary card heading into the PPV airs primetime on ABC for the first time ever — as well as ESPN and ESPN+ — at 8 p.m. ET.

The featured prelim takes place in the lightweight division between Brad Riddell and Jalin Turner. Prior to that, a trio of welterweight bouts will kick off the ABC broadcast: Robbie Lawler vs. Bryan Barberena, Ian Garry vs. Gabe Green, and Donald Cerrone vs. Jim Miller.

Ahead of their title defense, both Adesanya and Volkonovski sat alongside each other to discuss the fully-loaded fight card of the event.

Giving his take on the lineup, the middleweight champ claimed the UFC 276 card to be a “solid 10”.

Featherweight champion Volkanovski too agreed with the Kiwi fighter’s assertions, claiming the lineup to be stacked from top to bottom.