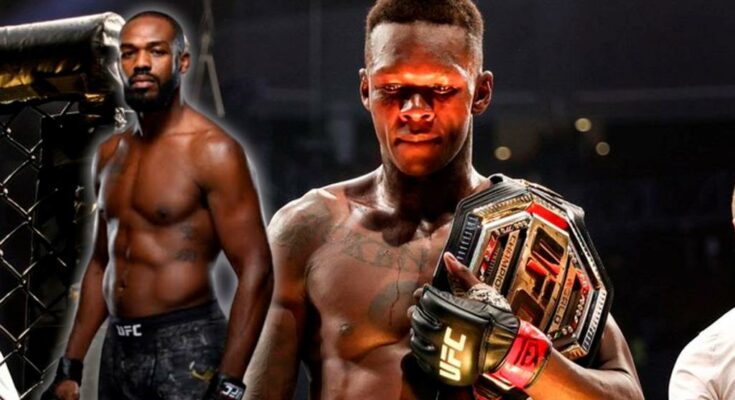 Israel Adesanya is set to put the UFC Middleweight Championship on the line against Jared Cannonier at UFC 276 on July 2. If he defeats Cannonier, then Adesanya will make his fifth successful undisputed UFC Middleweight Title defense.

Israel Adesanya and Jones have long been going at it on social media but momentum for the fight cooled off when “Izzy” failed to capture the light heavyweight gold against Jan Blachowicz last year.

Things appear to be closer than ever to Jones returning. The light heavyweight champ said a fight with ex-heavyweight champ Stipe Miocic was targeted for UFC 276, but it was pushed back to September, presumably at UFC 279, because Miocic wanted to prepare as thoroughly as possible.

Jon Jones plans to move up to the heavyweight division as well.

Speaking to media members ahead of UFC 276, Israel Adesanya had a suggestion for Jon Jones.

“He should move up in weight first [before we fight],” Adesanya said at the press conference for his UFC 276 showdown with Jared Cannonier. “Go fight Francis [Ngannou], or even, like, I don’t know, stop being on TMZ. Get his life together.”

Adesanya went on to say that he’s only concerned with what he’s doing right now, not on Jones.

“This is facts, or am I saying anything that’s not true?” he continued. “Just get his s*** together first, like [Daniel Cormier] said, and yeah, start fighting again, because there’s no fight if someone’s not fighting.

“I’m the one fighting, I’m staying active, I moved up in weight – not just talking about it. I’m going to do it again. Cementing my own legacy. I’m just worried about me right now. That’s the thing.”

Adesanya attempts the fifth defense of his middleweight belt and the third since his ill-fated attempt to capture the light heavyweight title against then-champ Jan Blachowicz. Adesanya’s coach and UFC President Dana White have both opened the door to a return to 205 pounds, where Jones dominated for so many years.

Jon Jones hasn’t competed since Feb. 2020 when he defeated Dominick Reyes to successfully defend the UFC Light Heavyweight Championship for the final time. Jones vacated the title and went on a hiatus due to issues with the UFC and preparing his body for a change in weight class.