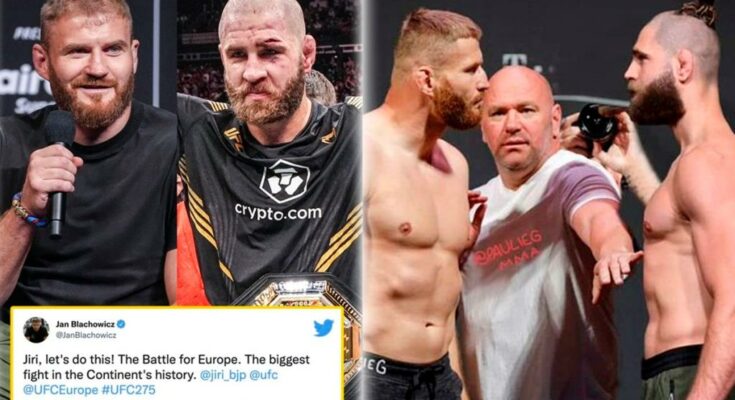 UFC 275 was a big night for Jiri Prochazka. With 28 seconds left in the fight, the Czech fighter managed to eke out a submission win over Glover Teixeira to become the new undisputed champion at 205 pounds.

Prochazka captured the belt over the weekend with a thrilling fifth-round submission of Glover Teixeira at UFC 275 in 2022’s new front-runner for “Fight of the Year.” The back-and-forth bout has already been hailed as one of the greatest in the division’s history, and now Prochazka has three potential names sitting in front of him for his first title defense.

The 29-year-old champion has already been called out both by Teixeira for a rematch as well as by former titleholder Jan Blachowicz for a major show in Europe. UFC president Dana White also told Barstool Sports prior to UFC 275 that the winner of July 30’s Anthony Smith vs. Magomed Ankalaev bout at UFC 277 could get the next shot at the belt, although that was before Prochazka and Teixeira put on one of the best action fights in recent memory.

For his part, Jiri Prochazka likes either of the first two options better than the third.

Blachowicz, who lost the title to Teixeira at UFC 267 last October, got himself back on the win column via third-round TKO against Aleksander Rakić in mid-May.

“I don’t know what’s the preference of the UFC, the organization. I want to communicate more with the UFC, like they want from me,” Prochazka said on The MMA Hour.

“I think the most dangerous man here in the light heavyweight division, after me, under me, there is Jan Blachowicz — and I think he can be the next challenger of me. But still, I have to keep respect for Glover. So one other [option] is to offer the Glover rematch, and the second thing is to fight Jan Blachowicz. I have to make a decision in that, but still, yeah, I have to talk with the UFC and my manager as well, what will be the best step.”

Ahead of UFC 275, Blachowicz suggested that an event headlined by he and Prochazka — the only male titleholders in UFC history from Poland and the Czech Republic, respectively — would be “one of the biggest fights in Europe” and could sell out 60,000 seats in a stadium somewhere in Eastern Europe.

To that, Jiri Prochazka agreed.

“Man, that’s something that I’m thinking about, because I think for the Euro audience, that will be the biggest, biggest, biggest [event] ever of the martial arts,” Prochazka said. “Because me and him, Polish and Czech Republic, they are next to [each other]. I will be ready and I will win. It doesn’t matter how, whatever it takes.”

Prochazka and Blachowicz even had a bit of a post-fight dust-up in Singapore immediately after Prochazka’s victory over Teixeira, although things stayed relatively tame.

During his post-fight scrum, Jiri Prochazka detailed the brief cage-side run-in he had with former champion Jan Blachowicz as he was making his way backstage. That brief moment was caught on video.

“He was a little bit friendly and a little bit aggressive. After I said, ‘Hey, OK, let’s go. You are the next,’ he started to be aggressive because he saw the cameras and all these things. He tried to flex a little bit,” Jiri Prochazka told reporters.

“I told him, ‘I love you.’ Because he was so aggressive, yeah? First, he was smiling to me, everything. And it was good. And after the fight, he was aggressive, ‘I wanna fight!’ So I said, ‘I love you, Jan. Let’s talk in the cage.’”

Jiri Prochazka, for his part, says he’s ready to take on the challenge as soon as he’s fully healed.

“He was so brave and he told me something about our fight. So I shared the energy with him. We will see. I will be ready, but just give me a little time to repair my face and to realize the mistakes from this fight.”

Either way, regardless of whether his first challenger is Blachowicz, Teixeira, or someone else, Jiri Prochazka wants to fight once more before 2022 is over and hopes the UFC capitalizes on his momentum after a stunning turnout of thousands of his Czech countrymen and countrywomen showed up to celebrate his championship victory on Monday.

“My preference is to do that [next fight] here in Czech Republic. But who knows?” he said.

“Like I said, I have to talk with the UFC about what will be the best case.”