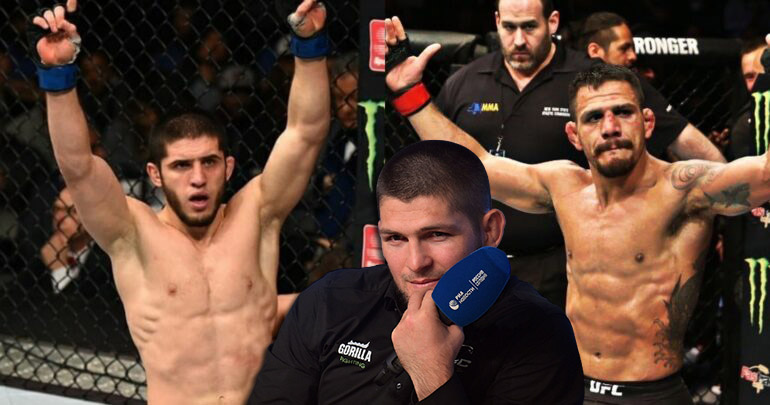 Undefeated fighter Khabib Nurmagomedov recently told the Russian media about the upcoming fight between Islam Makhachev and Rafael dos Anjos. In the fight, “Eagle “admitted that dos Anjos’ combat experience makes him impatient with his colleague.

Nevertheless, despite any anxiety that the former great lightweight can cope with, he is still more than confident that Makhachev has all the skills to claim victory. In fact, Khabib Nurmagomedov wants his star student to do something that no one has ever done before, and finish Rafael dos Anjos on the ground.

“Well, look, Rafael dos Anjos has fought me. He’s fought Kamaru Usman, Colby Covington, Felder, and many more. He fought Eddie Alvarez as well. He has great experience. In these types of fights, the experience factor is like a unique weapon. The way I see that fight playing out – because I’ve fought Dos Anjos – well, I want Islam to take him down early, to give him that wrestler’s pressure.

Rafael dos Anjos has only been finished in three of his thirteen losses. He was knocked out by Jeremy Stephens back at UFC 91 and suffered a similar fate at the hands of Eddie Alvarez to lose his title in 2016. And while no one has submitted or pounded him on the ground, dos Anjos did once tap because of a broken jaw—an injury sustained earlier in a bout where Clay Guida smothered him from top control back at UFC 117.

Islam Makhachev (20-1) has won eight of his twenty victories via submission. Yet, tapping dos Anjos will be no easy task. The Brazilian won gold in the Mundials in 2003 and earned his fourth-degree black belt in jiu-jitsu last year.