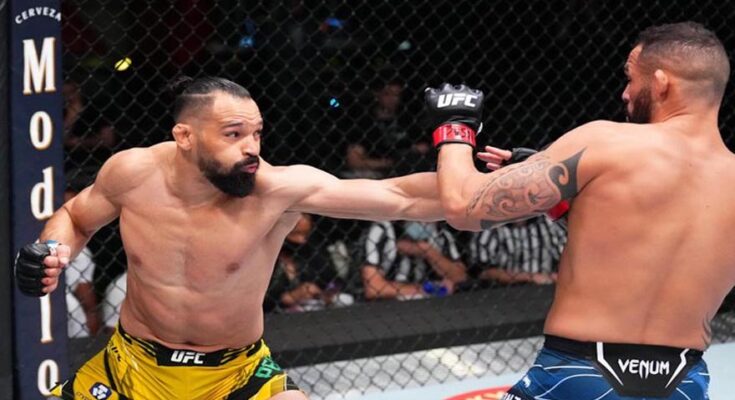 Michel Pereira (27-11 MMA) enters the contest on a four-fight win streak, his latest being a decision victory over Andre Fialho. ‘Demolidor’ has gone 5-2 during his seven-fight UFC career.

Meanwhile, Santiago Ponzinibbio (28-6 MMA) had entered tonight’s co-main event with hopes of rebounding from his split decision loss to Geoff Neal at UFC 269. The Argentine has alternated between losses and wins since returning to action in 2021.

UFC Vegas 55 co-main event proved to be a thrilling back and forth affair. Michael Pereira got off to a strong start in the opening round but Santiago Ponzinibbio stormed back in round two. The third and final five minutes was an all out brawl but did not conclude in a finish. Thus we went to the judges scorecards for decision.

Check out how the Professional fighters reacted to the fight Michel Pereira vs Santiago Ponzinibbio at UFC Vegas 55 below:

Get all of the results and highlights from UFC Vegas 55 fight card below:

Chidi Njokuani vs. Dusko Todorovic – Njokuani def. Todorovic via KO (elbow) at 4:48 of Round 1

Alen Amedovski vs. Joseph Holmes – Holmes def. Amedovski via submission (rear-naked choke) at 1:04 of Round 1

Jailton Almeida vs. Parker Porter – Almeida def. Porter via submission (rear-naked choke) at 4:35 of Round 1

Chase Hooper vs. Felipe Colares – Hooper def. Colares via TKO (punches) at 3:00 of Round 3