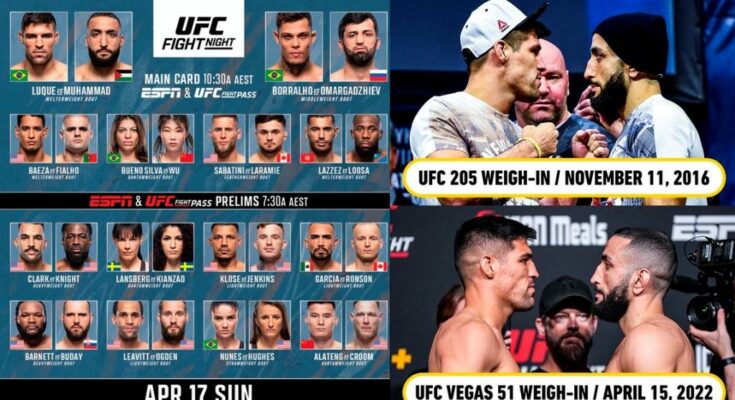 Vicente Luque and Belal Muhammad are locked in for their rematch.

Luque and Muhammad first fought back in 2016, with Luque scoring a 79-second knockout at UFC 205. Now, the No. 5 and No. 6 ranked welterweights in the MMA Fighting Global Rankings are officially set to run it back, having both made weight at Friday’s official weigh-ins for UFC Vegas 51, with Luque coming in at 171 pounds and Muhammad weighing 170.5 pounds.

The 26 other fighters competing on Saturday all also successfully made weight, with Drakkar Klose being the only fighter to struggle. Klose came at 156.75 for his first attempt, but was given an hour to shed the last .75 pounds. He managed to successfully do so, coming in at the 156-pound limit.

Also of note, William Knight, who came claimed the ignominious record of biggest weight miss in UFC history when he came in 12 pounds over the light heavyweight limit for his fight against Maxim Grishin at UFC 271 in January, seems to be enjoying the benefits of the heavyweight division, tipping the scales at 251 pounds for his fight this weekend. His opponent, Devin Clark, will be at a substantial size disadvantage against Knight, having only weighed in at 223 pounds.